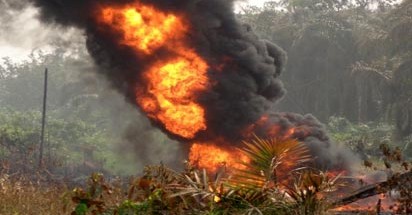 An Urhobo militant group known as the Niger Delta Greenland Justice Mandate, NDGJM, has claimed responsibility for bombing of a pipeline in Delta State.

The group claimed to have attacked the Ogor-Oteri pipeline operated by the Nigerian Petroleum Development Company (NPDC), a subsidiary of NNPC and local energy firm Shoreline, at around 03:00 a.m on Tuesday.

The NDGJM in a statement signed by its leader, “General” Aldo Agbalaja said “The Niger Delta Greenland Justice Mandate will no longer sit quietly watching the endless harassment of our people in various parts of the region by the Nigerian military”.

“They are now killing our people on the basis of mere suspicion, this cannot continue”, the NDGJM added.

The group stated that with the Nigerian military’s launch of the ‘Operation Crocodile Smile’, a training exercise aimed at strengthening and familiarizing troops with skills needed to survive the Niger Delta terrain, it was also serving a notice on the commencement of its own exercise, which it tagged ‘Operation Crocodile Tears’.

“It shall from now on be an eye for an eye; for every military atrocity carried out in the creeks and hinterland of the Niger Delta, the Nigerian armed forces will have the Niger Delta Greenland Justice Mandate to contend with”, the NDGJM vowed.

The alleged attack came on the heels of declaration by the Niger Delta Avengers, the group that claimed responsibility for most attacks in the region, that it had halted hostilities.