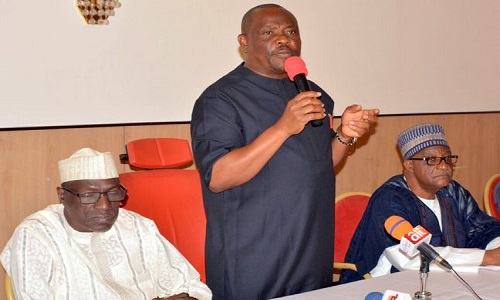 The Peoples Democratic Party, PDP’s Board of Trustees (BoT) has asked the Senator Ahmed Makarfi-led Caretaker Committee to form a new national convention planning committee with a mandate to hold the next convention of the party in Abuja.

The May 21 and August 17 botched national conventions of the party were held in Port Harcourt, Rivers State, and the planning committee was headed by the State Governor, Nyesom Wike.

The new position of the opposition party’s BoT may have been informed by the need to accede to some of the demands of the factional National Chairman of the party, Senator Ali Modu Sheriff, which includes the relocation of the national convention of the party from Port Harcourt to a neutral venue – Abuja as well as removal of Gov. Wike as chair of the planning committee.

A Communique signed by the Chairman of the BoT, Senator Walid Jibrin, also said that “the forthcoming National Convention of the PDP be held in Abuja, the Federal Capital Territory (FCT)”.

The BoT said it would facilitate the raising of adequate funds for the party, while also calling on “all PDP governors to continue pursuing positive programmes of good governance so as to clearly project the people-oriented manifesto of the PDP”.

The BoT, also on Monday, mandated its reconciliation committee headed by a former Information Minister, Prof. Jerry Gana, to continue with “all good efforts of reconciling all aggrieved Party members”.

They also advised the National Caretaker Committee to, as soon as possible, convene the meeting of the National Executive Committee (NEC) to approve proposals on the way forward for the party.

The BoT equally passed a vote of confidence on the Makarfi-led leadership and urged the committee to continue its “good work of repositioning the Party”.

Apart from Mr. Jibrin, who chaired the meeting, other members of the BoT in attendance included Makarfi; former Deputy Senate President, Ibrahim Mantu; former National Chairmen, Okwesilieze Nwodo, and Vincent Ogbulafor, amongst others.