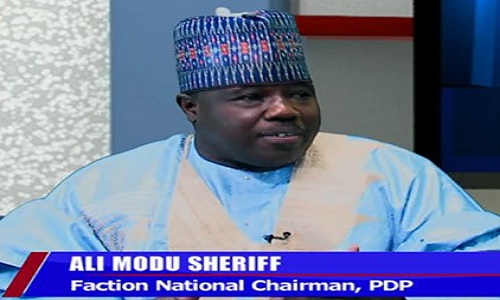 A factional national chairman of the Peoples Democratic Party, PDP, Senator Ali Modu Sheriff, has vowed to fight to the end and uphold his demands ahead of the August 17 national convention of the party.

The party’s Board of Trustees had inaugurated a reconciliation committee headed by a former Information Minister, Prof. Jerry Gana, to interface with Mr. Sheriff towards a peaceful resolution of the leadership crisis rocking the PDP.

In a move that suggested the BoT’s rapprochement was unsuccessful, the embattled chairman said until a list of demands he handed to the Gana-led committee were met, he would not give peace a chance in the party.

He, however, stressed that he was willing to resign if the Senator Ahmed Makarfi-led national caretaker committee, which he insists is unknown to the PDP constitution, agrees to hold an open and transparent convention in Abuja – one of his demands.

The convention has been scheduled to hold in Port Harcourt, the Rivers State capital on Wednesday, August 17.

“What I want is that the convention should be an open and transparent convention held in Abuja where everybody will participate.

“I work with my principles.

“We will not let PDP to be hijacked by few people – Governor of Rivers State, [Nyesom Wike] and Governor [Ayodele] Fayose”, he said in an interview on Channels Television on Sunday.

On allegations by some PDP governors that he was nursing an ambition to vie for the party’s presidential ticket in 2019, Sheriff said he never held discussions with anyone on the matter.

“I have never discussed with anyone about any plan to run for Presidency”, he said.

He also reacted to allegations by a former Aviation Minister and former spokesman for the Goodluck Jonathan Presidential Campaign Organization, Chief Femi Fani-Kayode that he had ties with the Boko Haram terrorist group.

Senator Sheriff, however, denied the allegation, claiming that the Boko Haram sect killed three of his brothers.

“How can I have a link with Boko Haram? They killed three of my brothers.

“I feel sad that I was linked with Boko Haram. People I served with when I was Governor know I will never be part of such thing”, he reiterated, describing Mr. Fani-Kayode as an inconsistent fellow, who should not be taken seriously.

“The likes of Fani-Kayode, who change the goal post on every issue, should not be taken seriously”.

According to the former Borno State governor, the PDP lost the 2015 presidential election as a result of impunity, but still believed the party would not be destroyed.

He also blamed some members of the PDP for the problems the party is currently facing, saying they wanted “certain people outside to come and be presidential candidate”.

He also dismissed claims that he still holds allegiance to the ruling All Progressives Congress and had been planted as a mole to thwart the opposition party from repositioning ahead of the 2019 general elections.