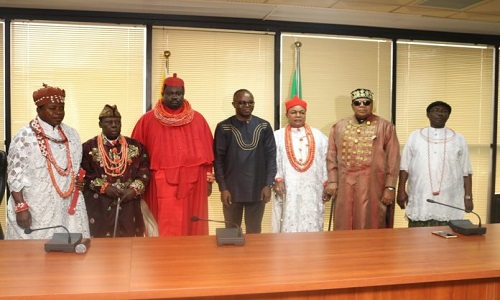 Traditional rulers and stakeholders from the Niger Delta on Thursday met with representatives of the Federal Government and read out terms that would build confidence as well as restore peace in the troubled region.

The parley came on the heels of a ceasefire announced by the Niger Delta Avengers and other militant groups in the region on Sunday.

In a communique, which was read at the headquarters of the Nigerian National Petroleum Corporation, NNPC, in Abuja by the Bolowei of Gbaramatu Kingdom, Chief Wellington Okirika, the traditional rulers listed six things the Federal Government should do in order to build confidence and stop the destruction of the country’s oil assets by militants in the region.

In the wake of the visit, the troops allegedly left tales of sorrow, destruction and tears following their inability to find their target.

“For the purposes of building confidence in the system, we wish to state here that as a matter of urgency the Federal Government should appoint/constitute a Federal Government dialogue team; release the 10 innocent school children arrested by the Nigerian Army on the 28th of May, 2016 in Oporoza and others in detention on trumped up charges.

“Return the Golden Sword, being the symbol of authority in the Gbaramatu traditional institution; return the three traditional council speed boats in custody of the Nigerian Army; cessation of hostilities perpetrated by the military in the Niger Delta region; and equally important, the Federal Government should make a categorical statement about the opening of the Maritime University, Okerenkoko Delta State for academic activities in the 2016/2017 session”.