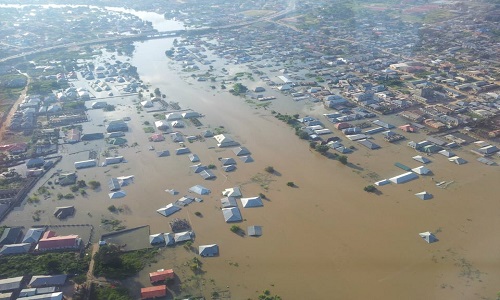 The appeal was contained in a statement signed by the Head, Corporate Communications, Public Relations Unit, National Weather Forecasting and Climate Research Centre of NiMet, Eva Azinge, in Abuja on Monday.

Mrs. Azinge said NiMet had predicted flooding in the eleven states due to the cumulative high intensity rainfall in those parts of the country in June and July.

She added that with the current rainfall, there were prospects of flooding in August and October.

“After thorough analyses of rainfall data from our observatories nationwide for June and July, soil moisture has either reached saturation, or near saturation levels”, she said.

“This is due to cumulative high intensity rainfall in some parts of the country in June and July.

“This means that floods should be expected in these areas because the soil is no longer able to absorb more rainwater in the coming weeks which coincide with the peak rainy season”.

Mrs. Azinge said many parts of the country would experience lower than normal total rainfall due to the effect of El Nino.

“Flooding could still be experienced in such areas; particularly those that are naturally prone to flooding”.

She recalled that the 2016 Seasonal Rainfall Prediction (SRP), identified parts of the Northwest, Southwest and low-lying areas, as particularly vulnerable to flooding during the 2016 rainy season.

According to Mrs. Azinge, “these observations and projections are also in agreement with the 2016 Annual Flood Outlook that was released by the Nigerian Hydrological Services Agency.

“NiMet advises Governments, communities and individuals in these vulnerable parts of the country to take proactive actions, such as clearing water channels, drainages and avoid activities that will block the free flow of waters.

“Governments, communities and individuals in these vulnerable parts of the country are advised to take proactive actions, such as clearing water channels and drainages, and also avoid activities that block the free flow of water.

“Closer attention should also be paid to NiMet’s daily weather forecasts and alerts. It is further advised that relevant agencies should perfect their emergency evacuation plans and activate them as soon as necessary.

“Meanwhile, NiMet will continue to monitor the rainfall pattern as well as general weather conditions across the country and issue updates from time to time”.

She said NiMet was also working in collaboration with the Nigerian Hydrological Services Agency to monitor rainfall across the country.