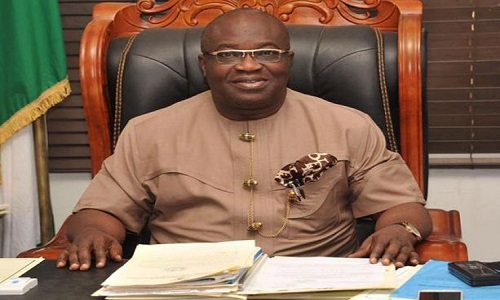 Embattled Governor of Abia State, Dr. Okezie Ikpeazu, has declared that henceforth, he would no longer receive individuals and groups on solidarity visits and courtesy calls at the Abia Government House in Umuahia, the state capital.

Since a federal high court sitting in Abuja ordered him to vacate his seat as governor and ordered that Dr. Uche Ogah be immediately issued certificate of return and sworn-in as governor, individuals and groups have been trooping to the Government House to express support to Mr. Ikpeazu over the ‘attempted coup’ against him.

But in a statement issued Monday by his Chief Press Secretary, Mr. Enyinnaya Appolos, the governor said he arrived at the decision to ban further visits after taking note of the cost and risk Abia people always passed through while mobilising from their localities to Umuahia, in order to identify with him almost on daily basis.

Gov. Ikpeazu, however, promised that he would continue demonstrating his appreciation by taking decisions that would enhance the well-being of the people.