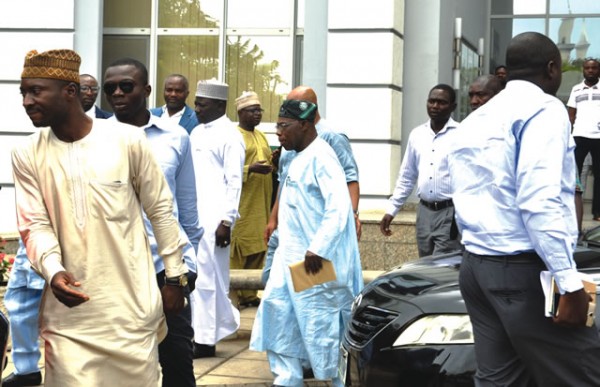 Contrary to speculation in a section of the social media that former President Olusegun Obasanjo yesterday attended the inauguration of the Peoples Democratic Party national convention committee at the Shehu Yar’Adua Centre in Abuja, he was at the centre for a different engagement.

The former president was at the centre to attend a programme on Agriculture while the PDP leaders were also at the same premises to attend their party’s event.

There were speculations Mr. Obasanjo, who publicly denounced the PDP and supervised the shredding to pieces of his party membership card on February 16, 2015 was making a sensational return to the party on whose platform, he was elected president for two terms of eight years.

Interestingly, leaders of the PDP, who were alerted to the presence of the Owu chief on the premises, rushed to pay homage to him.

Among those that were said to have rushed out to pay homage to the former president included the PDP National Caretaker Committee Chairman, Sen. Ahmed Makarfi; Secretary of the committee, Sen. Ben Obi and a former Deputy President of the Senate, Ibrahim Mantu.

Mr. Obasanjo exchanged pleasantries with the party chieftains briefly before he proceeded to attend the programme he had come for.