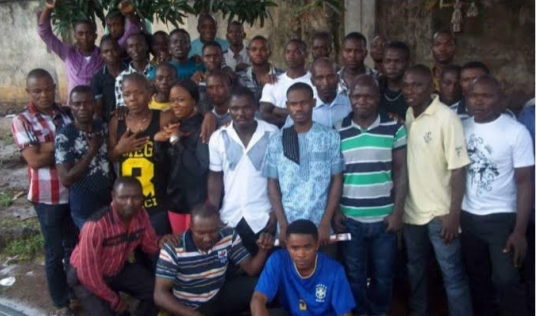 The apex body of Igbo youths, Ohanaeze Ndigbo Youth Council (OYC) has commended President Muhammadu Buhari and the Attorney General of the Federation and Minister of Justice, Abubakar Malami (SAN), for the release of 19 members of the Indigenous People of Biafra (IPOB), who were detained in Aba Prisons since February, this year.

The IPOB members were arrested by soldiers in Aba, Abia State by soldiers of the 144 Battalion, Asa, Ukwa West Local Government of the state following a clash during a prayer session at National High School along Port Harcourt road.

The detainees, comprising six females and 13 males, were released by a Magistrate Court in Umuahia, the Abia State capital on Thursday on the following a directive by Mr. Malami that they be released.

In a statement signed by the chairman of states’ chairmen, Mazi Alex Okemiri on Friday, the OYC also praised Gov. Okezie Ikpeazu of Abia State for facilitating the IPOB members’ release.

The statement reads in part: “We hereby salute Mr. President, the Attorney General of the Federation and Governor Okezie Ikpeazu of Abia state for facilitating the release of the pro-Biafran activists arrested and detained during their prayer session at Aba some months ago.

“This commendable action will go a long way to douse the tension and bad blood generated by their detention. We equally urge Mr President to release other MASSOB and IPOB detainees including the leader of IPOB Nnamdi Kanu.

“This will pave the way for dialogue, which remains the only way to solve the agitation. We commend Governor Okezie Ikpeazu for the role he also played in the release. He has endeared himself to Ndigbo for pursuing the reduction of tension in the South East”.

The OYC also called on various groups in the South-east to stop creating unnecessary tension in Abia State in the wake of the controversial removal of Gov. Ikpeazu by a federal high court sitting in Abuja.

“The warning is sequel to a media interview by one? Igwekala Leo Ugomaduefule, the National President of a group known as Ndigbo Bu- Otu, where he asked the Abia State Governor, Okezie Ikpeazu to resign.

“Abia, a state in Igbo land should not be a testing ground for lawlessness. Nigeria is not a banana republic and the South-East should not be used for such experiment.

“We are amazed that a group suddenly emerged and started talking about the Abia stalemate. There are other issues affecting Ndigbo such as the detention of Nnamdi Kanu, need for restructuring and true federalism but this faceless group never talked about it.

“The OYC is warning this group to desist from stoking ember of confusion in Igbo land. We have already declared the self-styled members of the above group persona-non-grata and we expect the general public to treat them as such”.

It further urged the feuding parties in the Abia governorship tussle to utilize all the legal avenues available to them, stressing “any attempt to forcefully remove Governor Okezie Ikpeazu will be vehemently resisted by Ndigbo.

“Our advice to Uche Ogah is to toe that path of peace and stop allowing outsiders to use him in creating a situation of confusion in Igbo land. What we are experiencing right now cannot happen elsewhere and for that we say unequivocal no to it”.