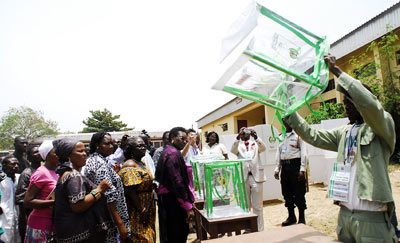 The leadership of the Muslim community in Ondo State have expressed their determination in playing a prominent role in determining who becomes the next governor of the State.

Member of the Nigerian Supreme Council for Islamic Affairs ( NSCIA) made the demand on Monday.

Addressing a press conference in Akure, the capital of the state, the Chairman of NSCIA in the state, Iman Habibullah Akinpelumi, said that with over 500,000 eligible Muslim voters in the State they were ready to give their full support to any party that would field a Muslim as candidate or running mate.

He insisted that any party that produced a Christian-Christian ticket would be rejected by Muslims, as they would not compromise their present political height in the State.

He lamented that the political gladiators in the state had always denied Muslims juicy political posts not because of incompetency but because of their religious inclinations.

Also contributing to the demand, the Secretary General of NSCIA in the State, Imam Abdulazeez Folayemi, maintained that all the political parties in the state had Muslims that were aspirants jostling for the number one position in the State.

The present Deputy Governor of the State, Lasisi Oluboyo, ‎as well as his predecessor Ali Olanusi are Muslims.

Before the emergence of Mr Olanusi, Ondo State had, since 1999, been led by Christian governors and deputies.