A Ryanair passenger managed to bypass security at Madrid-Barajas Airport and leaped from an open gangway onto the tarmac. 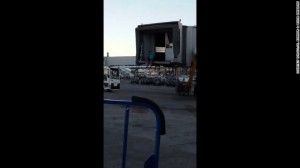 Still lugging two bags, he appears to try to stop a baggage carrier vehicle, but gives up and then sprints toward the waiting plane where he is finally stopped by the ground crew. 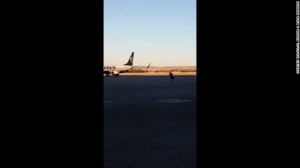 Perhaps most remarkable of all, the man then boarded his plane, which was bound for Spain’s Canary Islands.

He will be detained upon landing in Gran Canaria where he will also face trial.

The frantic dash was caught on camera by a ground crew member at the airport and posted on the CC.OO. Ryanair and Lesma Handling (Madrid Airport Workers Union) Facebook page.

“This particular passenger was missing a Ryanair flight and, unbelievably, skipped several security protocols established by AENA (the authority which deals with Madrid-Barajas airport),” said the post.

“We’re talking about level 4 security protocols! Not even with all those protocols we can feel safe,” it continued.

An AENA spokesperson said that the passenger entered the boarding area and broke through the anti-fire barrier to run after the plane.

“Because the alarm was triggered, the airport’s Civil Guard was alerted,” the spokesperson added.

Ryanair said in a statement that “since this video relates to a security breach at Madrid Airport, it’s a matter for Madrid Airport Police.”

Madrid Airport Police were reported to have declined to comment.