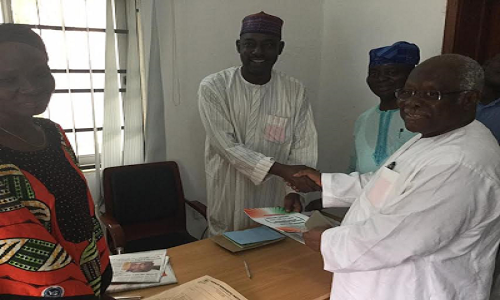 A former Deputy National Chairman of the Peoples Democratic Party, PDP, from South-West, Chief Bode George, has picked the form to run for office of the national chairman of the party.

Mr. George, who has not hidden his ambition to head the main opposition party, picked the form at the national secretariat of the PDP in Abuja on Friday after leaders of the party from the southern part of the country met in Port Harcourt, the Rivers State capital a day earlier, decided that the South-West should be allowed to occupy the office.

The PDP National Convention, where a National Chairman and new members of National Working Committee, NWC, would be elected, has been slated for August 17 in Port Harcourt.

Speaking to reporters after he paid for the form, Mr. George promised to reposition and stabilise the party.

He said, “It takes and experience captain to stabilise a ship hit by tornado. And if you know the crisis in PDP; that is the position the party is facing right now.

“But I am happy that all is not lost, and the condition has been enhanced, zoning has gone extremely well. I have paid my dues in this party and I should not be afraid of anybody.

“If people vote for me, I look forward to stabilise the party and put it in right position. The ruling party should get ready for serious engagement because we have started a cohesive battle ahead 2019”.

George promised to bring back those who defected from the party to the All Progressives Congress, APC, where he said they remain as tenants.

“Even those of our friends who were angry and left for APC, they are tenants there because they are landlords in PDP.

“If we are lucky and we get the right leadership who is fair and just and committed in the party, they will come back”, he declared.