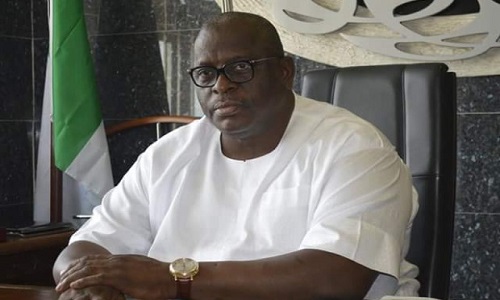 In a statement he circulated in Abuja Tuesday, the senator pleaded with elders in the party to find amicable ways of reconciling the Caretaker Committee headed by Senator Ahmed Makarfi with the sacked Senator Ali Modu Sheriff faction.

According to him, it would be better for the party to unite the two factions before going ahead with the proposed convention, warning that doing otherwise could worsen the crisis situation.

While the Sheriff faction said it would amount to contempt of court to go ahead with the national convention in view of the latest, in a series of conflicting court judgments, which declared any action or decision by the Makarfi faction as illegal, null and void, the national caretaker committee, backed by key organs of the party, including the PDP Governors, has resolved to go ahead with the convention as there is no court order stopping it.

Kashamu further warned that unless issues of the various conflicting court injunctions are fully addressed with the two factions in agreement, the outcome of the August 17 convention may also become a subject of fresh litigation.

The senator said, “Going to Port Harcourt for another national convention on August 17, without addressing the issues that have stuck out like a sore thumb might turn out to be an exercise in futility.

“I appeal to all our leaders to wade into the crisis and resolve the issues. If we gloss over the issues and facts and go ahead to hold the proposed convention without resolving them, the perception of PDP as a lawless organisation will sink deeper and ultimately public opinion will be against us.

“An air of palpable confusion pervades our party and the land, with one division of the court saying Makarfi’s appointment is right while another division of the same court says Sheriff is the authentic national chairman of our party.

“We cannot continue like this. Already, the nomination (governorship) processes in Edo and Ondo States are being endangered by the current crisis.

“It is incumbent on all well-meaning leaders and elders of the party to court Senators Sheriff and Makarfi and look for a political solution to this crisis and resolve it, once and for all. Nothing is too much to give, if we truly love the party”.

The PDP chieftain affirmed that while there was no court injunction stopping the proposed August 17 convention, the reality of a pronouncement by a court in Abuja to the effect that the Makarfi committee cannot lawfully take actions on behalf of the PDP, remained a source of grave worry.

Besides the resources that might be wasted on the exercise, Kashamu warned that going ahead with the convention could also constitute contempt of some of the court injunctions on the part of the organisers.

He further warned that these loopholes could easily be exploited by groups and individuals who are bent on frustrating the efforts of the party to their own advantage.

“They wait on the sidelines to analyse situations and then go to court when you least expected to procure orders and judgments that they use to exploit the system”, he said.

Stressing the need for the party to guard against such avoidable pitfalls, Kashamu appealed to the party leaders to help put an end to the culture of impunity, which he lamented has continued to bedevil the PDP.

He stated that for peace to reign, party leaders and members should stop seeing themselves be above the law

“Thus, it is crucial for us to find a political solution to the leadership crisis, unite our people and resolve the issues so that the various court cases can be withdrawn. An assortment of court orders, rulings and judgments will only deepen the crisis and make it intractable”, he added.

The senator called on party stakeholders to do the right thing so that when they are called to account for their actions, they will be found on the right side of history and the law.