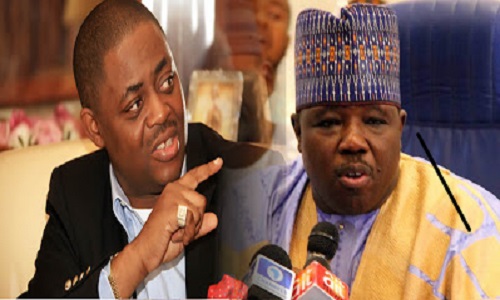 A former Aviation Minister, Chief Femi Fani-Kayode, has denied claims by a factional national chairman of the Peoples Democratic Party, PDP, Senator Ali Modu Sheriff that he sent people to beg him (Sheriff) after he labeled the party chair a Boko Haram sponsor.

Senator Sheriff, who was interviewed on Channels Television last night, claimed that the former minister sent emissaries to him after he instructed his lawyers to file a case against Mr. Fani-Kayode for labeling him a Boko Haram sponsor.

“How can I have a link with Boko Haram? They killed three of my brothers.

“I feel sad that I was linked with Boko Haram. People I served with when I was Governor know I will never be part of such thing”, the factional PDP chairman reiterated, describing Mr. Fani-Kayode as an inconsistent fellow, who should not be taken seriously.

“The likes of Fani-Kayode, who change the goal post on every issue, should not be taken seriously”, he added.

In his response on Monday, Fani-Kayode, who was the spokesman of the Goodluck Jonathan Campaign Organization in the 2015 presidential election, described the former Borno Governor as a desperate liar and drowning man.

According to him, Mr. Sheriff’s mission is to destroy the PDP, stressing that if he, alongside former PDP Ministers, had not stood up to the former governor when he was first appointed national chairman in February this year, he would have succeeded in his mission.

“I am proud to have been the first to see him for what he is and to publicly blow the whistle on him.

“I was one of those that led the rebellion against him and orchestrated the campaign to push him out and dump him as the National Chairman of our party and many have thanked me for that including some of those that brought him in the first place and attempted to impose him on us”, he said.

Likening Mr. Sheriff to the devil, whose words should never be believed or taken at face value, Fani-Kayode insisted that “He is a curse to the PDP and the sooner he is kicked out of the party, the better it is for us all”.

On the issue of “changing the goal post on every issue”, the ex-minister pointed out that Sheriff has changed political parties no less than four times in the last few years.

“Each time he goes to a new party that is not in power at the center he assumes the role of a government mole and spy and tries to destroy it from within on behalf of the government of the day.

“That is his modus operandi. On return, he gets protection from the state for all the many atrocities he has committed over the years. He has betrayed everyone and every political party he has ever worked with or for”.

He went on to claim that during the Olusegun Obasanjo administration, the then Borno governor was used to spy on and destroy the now defunct All Peoples Party, on whose platform he was elected governor, adding the same scenario is playing out now in the PDP with President Muhammadu Buhari using Sheriff to destabilize the main opposition party.

“Luckily he has failed because 99 percent of PDP members have rejected him and now he is on his own.

“He failed in his evil mission and now he is making noise like a chicken or snake whose head has been cut off”, Fani-Kayode said.

Maintaining that he is consistent in his views and “constant as the northern star”, the former Jonathan campaign spokesman said, “I will always speak my mind no matter whose ox is gored”.

Mr. Sheriff, he noted, is the opposite, claiming “He pretends to be a friend and a loyalist when his real plan is to stab you in the back and kill you on the night. He does not have the courage to be loyal to any cause, any person or any political party.

“He is more of a gangster than a politician and everyone knows it. He comes into another man’s house or political party and tries to pull it down by deceit and guile.  He is a vessel of destruction.

“That is the man who some misguided people believe can be trusted. He was in APP, then ANPP, then APC and now he is in PDP all in a matter of a few years and everywhere he goes he fights everyone until they get tired of him and push him out”.

“If anyone wants to talk about ‘changing goal posts’ it should certainly not be him”, Fani-Kayode asserted.