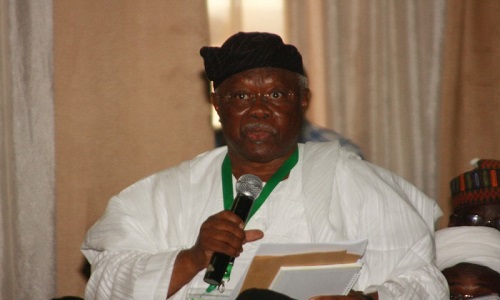 The emergence of Chief Bode George as National Chairman in the August 17 National Convention of the Peoples Democratic Party, PDP, will signal victory for the party in the 2019 general elections, his associates have said.

George is aspiring to become national chairman of the party and he only just paid the mandatory sum of N1million for the expression of interest form at the headquarters of the PDP in Abuja on Friday.

His aspiration received a boost this weekend as stakeholders of Lagos Mainland, who endorsed his candidature, expressed confidence that victory for the former deputy national chairman of the party at the convention slated to hold in Port Harcourt, Rivers State would translate to victory for PDP in the 2019 polls.

According to Agoro, Chief George is someone who had climbed through the ladder and garnered political experience that no other aspirant could boast of.

He said the first major success that the party had in Lagos in the last general elections and the defeat of five Alliance for Democracy (AD) states in South West in 2003, had the input of the astute politician.

He said, “The man (George) has touched many lives, nobody has his kind of political experience. If we are saying we want to change the changer come 2019, we have to put somebody who has the experience of Chief Bode George as national chairman of our party”.

On his part, Alimi, who is a political associate of late Funsho Williams, reiterated that the PDP would be on road to victory in the 2019 presidential election if George won election into the coveted position.

He said, “Well, I have actually come a long way with Chief Olabode George though behind the scene moves. I respect him as a leader and I think he has the capacity to lead this party and take the party to the next level.