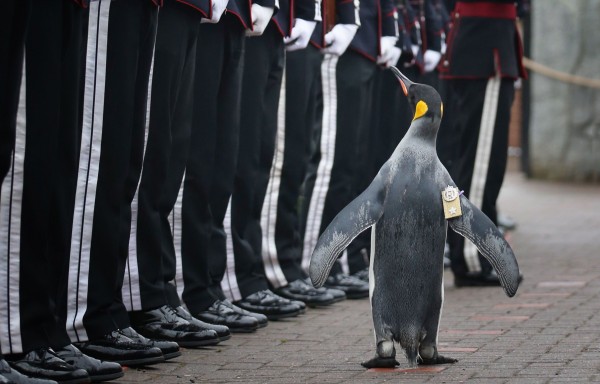 A king penguin by the name of Sir Nils Olav III has just been promoted to Brigadier in the Royal Norwegian Guard.

The Edinburgh Zoo’s resident penguin was awarded the prestigious title during a special ceremony at the zoo with 50 of Norway’s guardsmen in attendance.

Sir Olav III marched down the line of soldiers standing at attention before he was presented with an insignia on his wing and saluted by an officer.

His march was a fairly slow one, but he eventually completed the task at hand.

Edinburgh Zoo has a long history with penguins and Norway, and in 1913 the Norwegian family of Christian Salvesen presented the zoo with its first ever king penguin.

Nils Olav I was adopted by Norway’s Guard in 1972 and named the army’s mascot.

His name is a combination of Major Nils Egelien, who organised the adoption, and the then-King of Norway, King Olav.

During their lives, Sir Olav I, II and III have seen a gradual move up in the ranks, first from Corporal to Sergeant, eventually Colonel-in-Chief and, finally, Knighthood in 2008.

The Edinburgh Zoo says Sir Olav III is regarded very highly among the Norwegian guardsmen and has received these honours due to his “outstanding service and good conduct”.