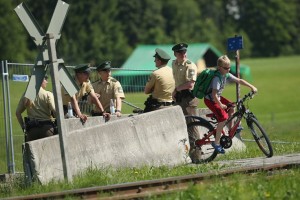 According to reports, a German police car got stuck on a narrow path while pursuing a riding suspect.

Rather than give up, one of the officers jumped on a child’s bike and successfully chased down and arrested the 27-year-old suspect.

Police say the suspect, who had evaded a traffic stop Tuesday in the southern German town of Bamberg, was found to be carrying drugs and driving under the influence.

Police spokeswoman Silke Gahn said Wednesday the officer, after the arrest, gratefully returned the 22-inch bike he had borrowed.