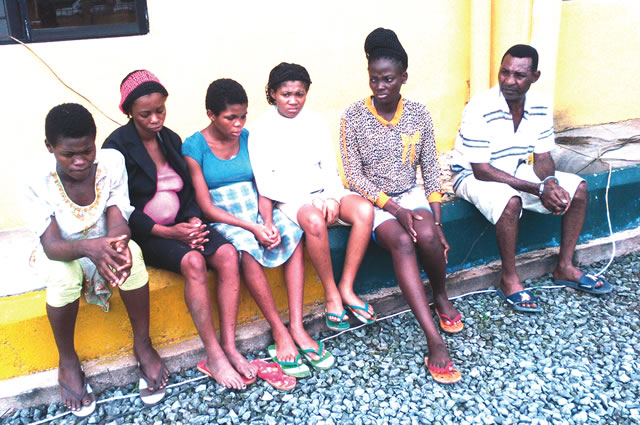 Five pregnant girls were rescued and a 54-year-old man, Nkem Nwokocha, was arrested when the Special Anti-Robbery Squad of the Abia State Police Command stormed a suspected baby factory in Ogbor Hill, Aba.

The state Commissioner of Police, Mr. Adeleye Oyebade, while parading the suspect said they were tipped off by the residents in the community and that they swung into action to detect the hideout where the pregnant ladies were kept.

Mr Oyebade gave the names of the rescued girls as Chidinma Chukwu, Kelechi Sampson, Happiness Godwin, Okoronkwo Mercy and Oluebube Onyabu all from different local governments in the state.

“Any crime that involves the sale of children is against humanity and God. Sometimes, it’s even hard to imagine that a child will be stolen and sometimes, their parents are involved. But we are not going to accept it. We are asking members of the public to give us useful information that will assist us in this direction,” the Police chief said.

In his statement, the suspect, Nkem Nwokocha who hails from Obegu village in the Ugwunagbo Local Government Area of the state claimed his wife who is a nurse had been running the factory for over six years.

He added that although the home was not legally registered with the government, it was working in liaison with a yet-to-be-identified social welfare home.

“I’m aware of what my wife is doing. Most times when I returned from my place of work, I saw these girls and when I asked them what they were doing in my house, my wife told me that their parents registered them with her for treatment.

“When the girls put to bed, my wife takes the babies to the welfare home we are working with. I don’t make any money from this because I have my own business and I am comfortable,” he said.

Two of the pregnant girls, Mercy and Kelechi, said they knew Nwokocha’s wife through a woman who referred them to her for treatment of stomach ulcer.

Others, however, claimed that they were only on a visit.

All the victims said they were not legally married, adding that they went to the maternity home without the consent of either their parents or those responsible for the pregnancies.

They denied any intention to sale their babies, but could not state any plan for their upkeep after birth.