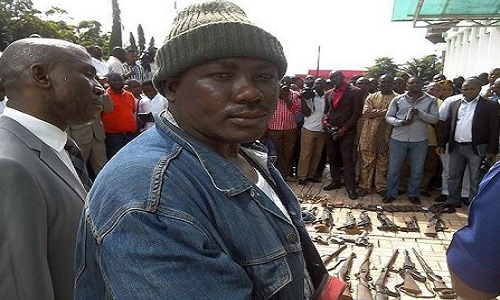 The Benue State Police Command has taken two children of a wanted militia kingpin, Terwase Akwaza, into protective custody as the Joint Task Force in the state intensifies search for him.

The JTF had begun the hunt for Akwaza, popularly known as “Ghana”, since few weeks ago on allegations of kidnapping, cattle rustling and assassination of people among others.

The repentant militia kingpin is wanted by security agencies in connection with the murder of the Special Assistant to Governor Samuel Ortom on Security, late Dene Igbana.

Addressing a joint state Security Council press briefing yesterday at the Police headquarters in Makurdi, the Commissioner of Police, Benue State, Bashir Makama, also said many suspects have been arrested in connection with criminal activities headed by Akwaza.

He said: “We have taken into safe protective custody two children of ‘Ghana’ and his sister, who is taking care of the children. We want to keep the children safe from people who might want to take revenge on them because of what their father had done to them. As he is hunting others, they are also hunting for him”.