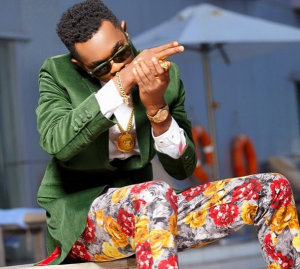 Nigerian singer, Patoranking was said to have gotten himself in a mess for demanding celebrity treatment from Ugandan Immigration officials.

According to Trending News Uganda, the reggae-dancehall singer, whose real name is Patrick Nnaemela Okorie, was arrested yesterday afternoon at the Entebbe International Airport for failing to adhere to strict checks and rules at the Nation’s entry point.

Eyewitness say the GOE star allegedly flouted orders given at the airport thinking his celebrity status would get him a VIP passage.
He then accused the immigration officers of disrespecting and harassing him when they asked him to comply with the rules.

“He failed to adhere to check-in rules and above all he had not secured his entry visa,” a source told the media site, adding that the singer was acting ‘too big’, demanding for VVIP treatment.

“He was just told to remove his cap for security check-up but he chose not to listen to instructions. He was denied entry and arrested for disobeying lawful check in orders.”

Following this altercation, Patoranking was reportedly delayed for 7 hours and was only released and given entry visa after apologizing and begging the airport officials.

After his release, the Ebonyi State-born singer reportedly lodged at the Hotel Africana where he addressed journalists.

Patoranking is in Uganda to promote his new album, ‘God Over Everything’.