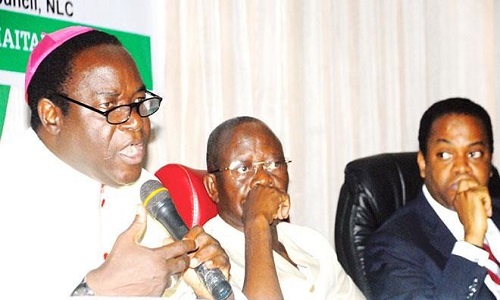 He spoke at ‘The Podium’, a public discourse organised in Abuja by the Kukah Centre themed: “From Activism to Political Power: The Challenges of Democratic Governance in Nigeria”.

The comrade-governor gave some of his colleague’s knocks, who he said enjoy fixed national emolument just like members of the National Assembly, but turn around to insist that states should be allowed to fix their own minimum wage.

“What I questioned and which I don’t accept is that you cannot have a centralized system of compensation for executives, governors, commissioners and local government chairmen. Their pay is centrally determined and the economy can afford that. What the Lagos State governor is receiving is what Edo State governor is receiving. If we have a national compensation, how can these governors turn around and question the wisdom of a national wage structures for workers?

“It is that selective application of fiscal federalism that I found extremely offensive and unacceptable. Even today, I remain firm that we must maintain a national minimum wage and we must find ways to implement and adjust it to reflect the cost of living and it is the duty of government and employers to find the revenue to pay those they hired to work. Non-payment of wages is a criminal breach of contract, whether in recession or prosperity”, Oshiomole said.

He said no one could change the situation through individual activism because the order that was meant to be changed was not due to ignorance, but due to the fact that those who benefit from the order would not want to let go, but that they must be engaged to change the order.

In his remarks, chairman of the occasion and a former Governor of Cross River State, Donald Duke, said it was a sad commentary that Nigerian politicians have turned to jobbers and budget padders, advocating for themselves and not the electorate they deceived with electoral campaigns.

“They cleverly and surreptitiously apply the word ‘change’. I, of course, won’t use that word because as a member of the PDP or what is left of it, that word change ‘dey do me one kind’”, he said.

The ex-governor, who said he advocates for improvement, not change, recalled that “We had a violent change in 1966, so change is not necessarily the way to go. Improvements, however, makes things happen, develops societies and affects the people positively”.

The convener of the event, Bishop Mathew Kukah, said the essence of the forum was to design programmes that encourage debate and free exchange of ideas.

“To serve as a mediating platform between the government, citizens and communities.

“Also, to enhance the quality of leadership training at all levels both in the public and non-governmental sectors”.

Activists from all sectors and relevant stakeholders attended the event.