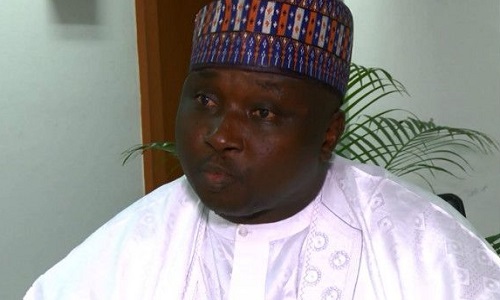 Chief Whip of the House of Representatives, Alhassan Ado Doguwa, has threatened to sue his fellow All Progressives Congress (APC) colleague, Abdulmumin Jibrin, for making damning allegations against him in the budget padding scandal.

Jibrin had mentioned Doguwa as one of the principal officers involved in padding the 2016 budget to the tune of N40billion.

In a statement he issued on Tuesday, the Chief Whip said he would sue the sacked Appropriation Committee Chairman for slander, irrespective of any action the House takes against Jibrin when it reconvenes from its annual recess next month.

“With this clear violation of our extant internal code of legislative conduct, which must attract legislative sanctions against Honourable Jibrin, Nigerians should know that all sorts of statements and pronouncements made by Honourable Jibrin were mere sham and misrepresentations of facts.

“He has lost out his campaign of calumny against the House. He has also lost out with the executive arm of government and our great party, the All progressives congress (APC).

“Having realised that he is already consumed, he is now resorting to court options, which I believe, he would lose out as well. Our respected judiciary would never fall victim of his misrepresentations.

“I finally want to categorically state that whichever steps the House may take on Honourable Jibrin on resumption in September, I, Honourable Alhassan Ado Doguwa, would in my personal capacity, definitely charge Honourable Jibrin to court for slander.

“He has maligned and defamed my hard-earned reputation and integrity. No matter what the House decides on Jibrin, I will never step on my responsibility to protect my good name and seek redress through our conventional courts”.