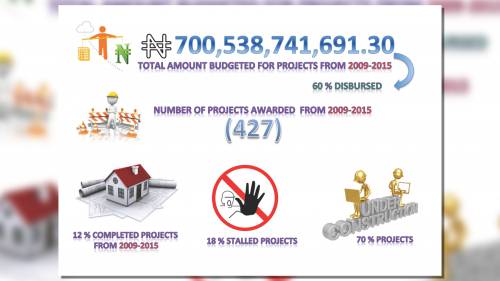 The enormous sums of money spent on the oil-producing Niger Delta region by the Federal Government between 2009 and 2015 delivered very meagre impact on the lives of the people of the area.

According to the report of the Ministerial Technical Audit Committee on Contracts Awarded by the Ministry of Niger Delta Affairs, exclusively obtained by SaharaReporters, the Federal Government spent over N700billion on 427 contracts and achieved a measly 8 percent impact, indicating that it was money not well spent.

Eighteen percent of the contracts were stalled, with only 12 percent completed. A hefty 70 percent remains under construction.

“The technical auditing exercise of the projects revealed that the intervention expected in the Niger Delta only commenced at the level of contract awards and practically did not address the yearnings and needs of the region, as clearly captured in the mandate of the Niger Delta Affairs Ministry,” the report said.

The objectives of the audit, stated the report, included establishing the value for money and determining how impactful the contracts awarded have been in the communities where they were awarded. The audit also sought to ascertain the level of contract completion to date, determine the value of work done and level of payment, assess uncompleted projects and prioritize for execution as well as develop a performance evaluation and sustainable fund deployment.

To execute its assignment, the committee drew up a checklist of projects in all the states, using available documents in the Ministry of Niger Delta Affairs, conducted field tours of all contract sites, interviewed contractors, and engineers representing them, as well as residents of benefiting communities and traditional rulers.

The committee also assessed the commitment/capacity of contractors, wrote detailed reports and ascertained the rationale for as well as the immediate functionality of projects, documented lessons on project implementation in the Ministry and recommended ways on how existing projects can improve the lives of the people of in the region. 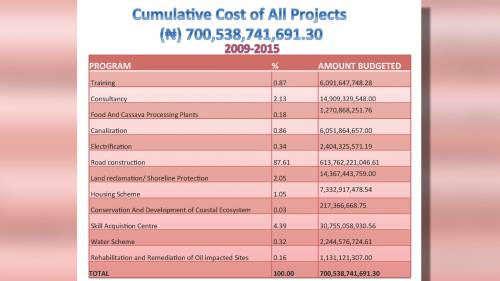 During the course of its work, the committee studied a list of all the contracts, technical specifications and Bills of Quantity, projects/technical drawings, financial/bank guarantees, approved contract agreements, project performance monitoring reports, interim and final job completion certificates and approval letters as well as correspondence with important project stakeholders.

The failure of the projects to deliver the envisaged impact, noted the committee in its report, was a product of many factors. These include project cost vis-à-vis performance. In general, the committee observed that the costs of projects awarded by the Niger Delta Ministry were higher than those awarded by other establishments such as the Niger Delta Development Commission (NDDC), which also operates in the same area.

“One which calls for serious scrutiny is the cost of roads. For instance, there was no standard to determine the cost of a kilometer on two-lane, three-lane or four-lane roads,” the committee observed.

Also observed was the trend of violating the contract award process. Right from procurement planning, observed the committee, there was indifference to the provisions of vital aspects of the Procurement Act.

Notably, said the report, there was indiscriminate award of contracts by initiating and benefiting departments of the ministry without the guidance of the procurement department.

“Awards never took cognizance of availability of funds and annual appropriation provisions. The structure and content of some contract agreements were loose for checks and balances, indeed hardly protected the interest of the ministry in case of disputes,” wrote the committee. 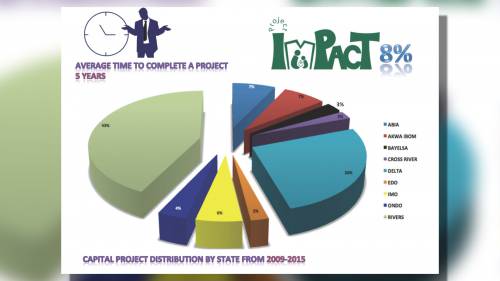 Similarly, the ministry’s management mechanism was dire. The committee found numerous abandoned/uncompleted projects, which it blamed on the inconsistency in government’s annual budgetary provisions and lack of capacity to deliver, especially in situations where funds released did not correspond with performance.

“Most contracts,” it said “were awarded with specific dates of completion, but were not captured in subsequent appropriations. This further exacerbated contractors’ poor performance and inability to achieve to achieve project objectives within the stipulated time frame. Consequently, no capital project was completed within the stipulated time frame,” the report revealed.

Another hindrance to the Federal Government intervention in the Niger Delta, noted the committee, was a duplication of functions, which manifested in the repetition of programs and conflict of projects in the region by the Niger Delta Affairs Ministry, NDDC, the Presidential Amnesty Programme (PAP) as well as state and local governments.

For instance, the committee pointed out that the construction and supervision of Omelema Agada Road in Rivers State led to a conflict between the Rivers State government and the Niger Delta Affairs Ministry. A similar occurrence was noticed in the 15kva sub-station electrification project in Khana local government, which was replicated by the Ministry of Niger Delta Affairs, Rivers State government and the National Independent Power Project (NIPP). Also in Eleme, there was a replication of an electricity transformer contract by the Niger Delta Ministry and the NDDC.

The committee’s assessment of the impact of the projects on the regions was undisguisedly unflattering. “All projects were to achieve the omnibus objective of enhancing socio-economic activities, human capital development, and environmental protection. Sadly, very insignificant numbers of projects have reached practical completion to provide a sense of belonging to Niger Deltans across board. About 80 percent of the projects are either ongoing, abandoned after payments, total abdication or refusal to deliver as in the case of Youth Capacity Building Programmes,” the committee added.

As a remedy, the Committee recommended that the Ministry of Niger Delta Affairs must begin to comply with the Procurement Act, show strict budgetary discipline and ensure that track record and experience must be considered when seeking contractors.

It also recommended that the ministry should arrest the rot and unethical conduct in its construction unit, clean it up and ensure that only professionals of proven integrity and competence are engaged in the future. Also, the committee counselled that the ministry should be firmer in checking and punishing infractions in the award of contracts and delivery of projects.

Foreign companies with dubious track records, it further recommended, should be expelled from the country and individuals involved in dubious deals be punished. Similarly, the committee prescribed the reduction in project costs, notably by using in-house professionals to develop costing templates, systems, and procedures.

“The way billions of naira are mentioned in construction projects value in the Ministry of Niger Delta Affairs has become so banal that very soon, it is believed, they are likely to escalate to trillions of naira, even though the values do not appear realistic vis-à-vis value added to the region through such contracts,” said the committee.

Another recommendation is that the Ministry of Niger Delta Affairs should supervise and coordinate Federal Government interventions in the region. This entails making the NDDC and the Amnesty Programme parastatals of the Ministry.

On project impact, the committee prescribed that the ministry should extensively consult with the people of the region before projects are located to ensure they coincide with the needs of the people.

And given the current parlous state of government finances, the committee listed a number of projects as priorities that need to be completed. Among these, it said are all housing projects and skills acquisition centre in Akwa Ibom State, East-West Road sections 1 and 2, Imo and Cross River states water projects, rural electrification and environmental sanitation projects that have a direct impact on the community, education and youth empowerment programs.