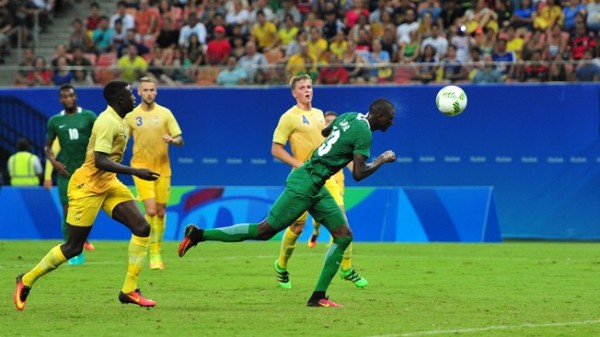 Nigeria has progressed to the quarter-finals at the Men’s Olympic Football Tournament Rio 2016 after a 1-0 victory over Sweden in Group B thanks to a Sadiq Umar header at the Amazonia Arena in Manaus.

For a large part of the match both sides played conservatively, but it was Nigeria who looked more threatening in attack.

Fresh from scoring 4 goals last time out, Oghenekaro Etebo attempted several shots in the half but he was unable to get the better of Swedish goalkeeper Andreas Linde.

The Dream Team eventually found the opener 6 minutes from time, when Stanley Amuzie delivered a cross that found Umar and he made no mistake, scoring with a diving header.

Nigeria continued to dominate the game in the second half, and just 3 minutes in, captain John Obi Mikel fired a well-driven shot that was eventually saved by Linde.

The goalkeeper had to be alert 4 minutes later when Etebo dribbled inside the corner of the penalty box and attempted a curling effort, but once again, Linde saved.

Nigeria eventually held on for all three points.

Nigeria will face Colombia in their last group match.The venue of the game is in Sao Paulo.

Sweden meanwhile must win their game against Japan in Salvador in order to qualify for the quarterfinals.