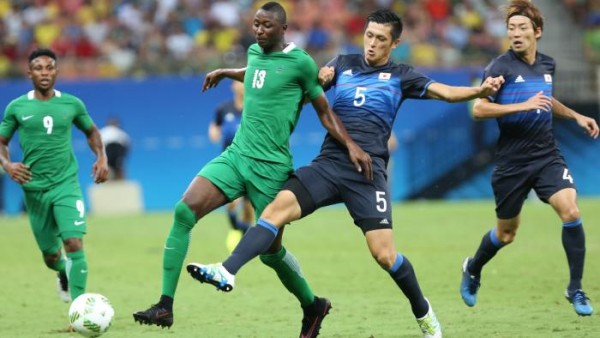 Nigeria’s men’s football team made an extraordinary start to their Rio 2016 Olympic campaign, beating Japan 5-4 in Manaus on Thursday just hours after landing in Brazil following a travel mix-up.

The team was stranded in Atlanta for days amid a bizarre saga that saw flights canceled because of missed payments and because a plane was too small, before eventually taking off on the morning of the game.

The Nigerian squad eventually landed in Manaus at 2:19 p.m. on Thursday afternoon, with the game against Japan beginning at 9 p.m.

However, despite what would seem to be the worst kind of preparation, Nigeria produced an inspired display to sink Japan. The contest was evenly matched in the opening stages, with honors remaining even following a frantic opening burst that produced four goals in 10 minutes.

Sadiq Umar put Nigeria ahead just 5 minutes in before Shinzo Koroki equalized moments later from the penalty spot. Oghenakaro Etebo put the African side back in front, only for Takumi Minamino to again make things all square.

Etebo put Nigeria back in front after 41 minutes the tone was set and completed his hat trick after 50 minutes, calmly slotting home his fourth to make it 5-2 on 65 minutes.

There was still time for some late drama, as Nigeria showed fatigue as the match wore on. Takuma Asano pulled one back with 20 minutes to go, and Musashi Suzuki narrowed the gap to one deep into injury time.

However, Nigeria’s night of glory was completed seconds later when the referee blew for full-time, finishing off a remarkable, and exhausting day for a team whose plight captured international attention and sympathy.