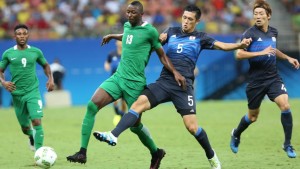 Nigeria lead Group B after an entertaining 5-4 win over Japan and will be keen to continue their momentum when they face Sweden.

Despite arriving in Brazil just 6 hours prior to kick-off, the Dream Team remained focused and dispatched the Asian U23 champions, in a game that saw both teams struggle defensively.

Samson Siasia‘s side had Oghenekaro Etebo to thank after the midfielder scored 4 of Nigeria’s 5 goals.

They will be hoping to tighten up at the back when they face Sweden on Sunday, after conceding 4 goals against Japan.

Sweden, meanwhile, played out a 2-2 draw against Colombia in their opening encounter and sit in the second place on the table two points behind Nigeria.

The Swedes are only making their second appearance, with their previous outing coming in the 1992 games in Barcelona when they were knocked out in the quarter-finals.

It is the first time Nigeria and Sweden are meeting in the Olympics.