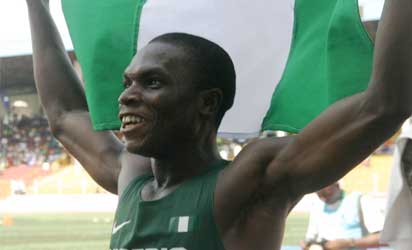 We never quite expected it but he did it!

Nigeria’s national 200m champions, Divine Oduduru qualified from heat 9 alongside World record holder, Usain Bolt. Oduduru who came second and improved his personal best to 20.34 seconds will be encouraged by his strong performance as he’ll be hoping to qualify from the semi-finals.

He will face Britain’s Adam Gemili, Justin Gatlin, Danny Talbot and Nethaneel Mitchell-Blake in the Semi finals. Oduduru shot to fame at the African Championships in Congo when he emphatically declared that he was not scared of facing Usain Bolt.
He did just that on Tuesday evening and we’re proud to say we’re all rooting for him!