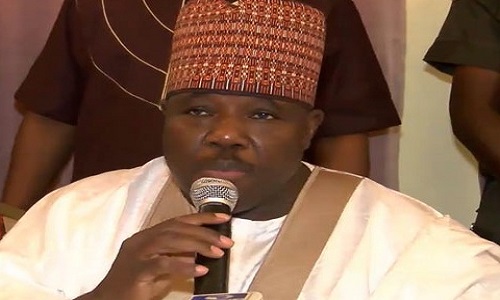 The embattled factional national chairman of the Peoples Democratic Party, PDP, Senator Ali Modu Sheriff, has said that the immediate past Chairman of the party’s Board of Trustees (BoT), Chief Tony Anenih, can only be re-admitted into the board if he answered the query issued to him for alleged anti-party activities.

Senator Sheriff was reacting to a letter written by Secretary of the Ahmed Makarfi-led Caretaker Committee, Senator Ben Obi, re-admitting Anenih into the BoT.

Mr. Obi had in the letter said: “With a view, to finally clearing all issues relating to this matter and based on your request to meet with the current Caretaker Committee, and the agreed meeting, which took place on July 13, 2016, the Committee Chairman, Senator Ahmed Makarfi, wishes to thank you for appearing before it to finally clear all issues relating to this matter.

“Having heard from you, and made some consultations, the Caretaker Committee has reviewed the whole episode and decided to withdraw the said letter from and by the defunct National Working Committee”.

But in a statement signed by Hon. Bernard Mikko on behalf of Sheriff, the faction noted that the “National Working Committee (NWC) issued a query to Chief Tony Anenih in April 2015 as part of disciplinary procedures for his anti-party activities in Imo state during the 2015 General elections in line with Article 57(4) of the PDP Constitution 2012 (as amended). Chief Anenih did not respond to the query but chose to tender a letter of resignation as BoT member. Up till date, the query remains unanswered and his resignation remains valid”.

“Any effort to re-admit the chief will have to follow due process which is well known to all party members. If the chief is desirous of returning as member of the BoT, he should re-apply to the party, with his response to the pending query for consideration. Party members are hereby assured that no individual or group will be prejudiced in the enforcement of discipline and the application of the rule of law”, he said