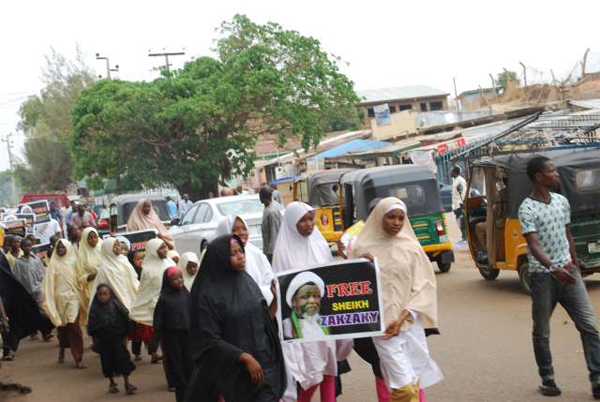 Some members of the Islamic Movement in Nigeria, otherwise known as Shiites, on Wednesday stormed the streets in their hundreds in Kaduna State to protest the ongoing detention of their leader Sheikh Ibrahim El-Zakzaky, and other members.

Among them were children, between the ages of 10 and above as they marched through Muhammadu Buhari Way in the state displaying placards and chanting repeatedly “free our leader,” “please free El-Zakzaky,” “we want justice,” “He needs to go for medical treatment.”

The Leader of the protesters, Abdullahi Mohammed, pleaded with the Federal Government to release their leader unconditionally for him to be able to go for proper medical treatment..

The protesters were believed to have started trekking all the way from their base in Zaria since Tuesday, they said they were
heading towards Abuja and vowed to remain there until FG grent their request.

The protesters claimed most of them were orphans and widows and that El-Zakzaky had been the one catering for their well-being over the years.