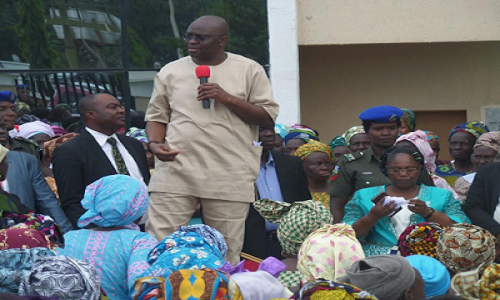 Governor of Ekiti State, Mr. Ayodele Fayose has described his ‘stomach infrastructure’ program as a way of life he is not ready to jettison anytime soon.

He made this known in a chat with journalists shortly after a special session with widows from across the state at the Funmilayo Olayinka Women Development Centre, Fajuyi, Ado-Ekiti on Tuesday.

The governor popularized the concept of ‘stomach infrastructure’, which places a premium on the general well-being of the people – through the provision of food items and cash – over the development of critical physical infrastructure such as roads, hospital, schools, hospitals, jobs etc.

Governor Fayose, who promised to continue to do his best in making the widows happy, gave assurance that their quota in the state’s poverty alleviation scheme, whereby N5,000 will be paid every month to ten thousand beneficiaries, is secured.

He said: “It’s an ongoing thing, we didn’t just start today, today’s program is meant to alleviate the suffering of the people, to help them in keeping body and soul together, this is for the widows, we have done for people in some other sectors that needs to be supported. 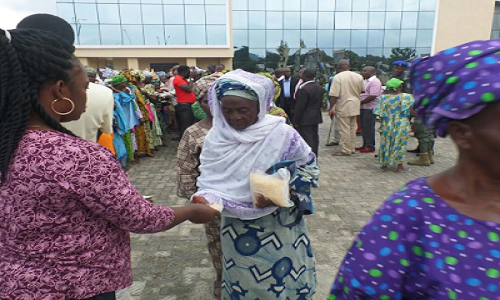 “It’s a way of life, we are doing it continuously and we’ll not stop. The #5,000 monthly stipend we talked about, it’s about our poverty alleviation package of #5,000 per person, though it cannot go round at a time, we will ensure we maximize the number of beneficiaries from the widow’s category, we’ll make sure they get the stipend, and on time too”.

Beneficiaries, who were all smiles as they went home with food items and some undisclosed amount of cash, expressed thanks to Gov. Fayose for the kind gesture, urging him to make it a regular exercise.