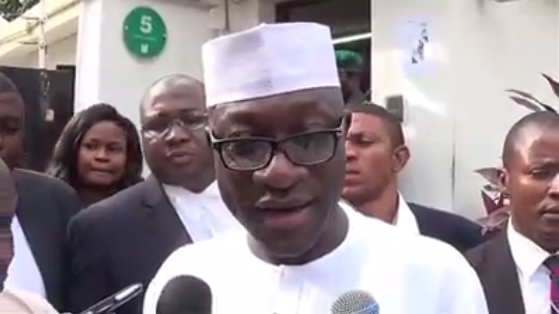 The sacked Chairman of the House of Representatives Committee on Appropriation, Abdulmumin Jibrin, has dragged the Speaker of the House, Yakubu Dogara, his deputy, Yussuf Lasun and other principal officers before a federal high court to stop an alleged plan to suspend him.

A last ditch effort by the governing All Progressives Congress (APC) to find a political solution to the imbroglio was unsuccessful as an order to refrain from making any further public pronouncements by Messrs. Dogara and Jibrin, was not observed with both parties sustaining their media war.

However, sensing that he could face suspension from the House, the former Appropriation Committee Chair rushed to the FCT court on Thursday to restrain the House of Representatives and its principal officers from suspending him as member of the House.

In the suit marked: FHC/ABJ/CS/595/2016, which commenced by way of writ of summons Jibrin, who is representing Kiru/Bebeji Federal Constituency of Kano State, also filed an ex-parte motion, seeking among others, an order restraining the defendants from taking steps to suspend him pending the determination of the substantive suit.

He also wants the court to make a declaration that the decision taken by the defendants at a meeting held on August 3, 2016 to suspend the plaintiff as a member of the House of Reps without granting him the right to fair hearing, is unlawful.

Jibrin, in a supporting affidavit, stated that immediately the 3rd to 14 defendants (Dogara and other principal officers) got wind of the petitions he submitted against them to Independent Corrupt Practices and other related offences Commission (ICPC), Economic and Financial Crimes Commission (EFCC), the Inspector-General of Police (IGP) and others, they held a meeting on August 3, 2016, where they allegedly resolved to suspend him.

He said that the defendants also agreed to urgently reconvene the House from its current recess “with a desperate agenda to suspend the plaintiff contrary to the Rules of the House”.

“That one of such meetings was held by the 3rd to 14 defendants at the residence of the 3rd defendant (Dogara) in Apo, Abuja on August 3, 2016.

“If the reliefs of the plaintiff are not granted, the plaintiff will be suspended as a member of the House of Reps, and this will greatly prejudice him and thousands of his constituents, who rely on him to afford them their due representations in the Federal Legislature”, he argued.