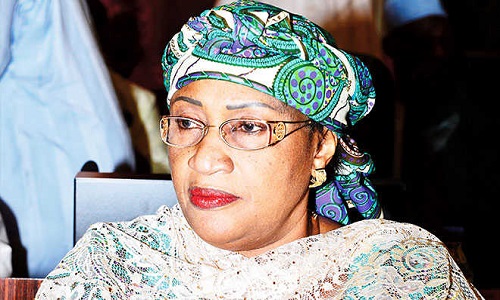 The Minister of Women Affairs and Social Development, Senator Aisha Jummai Alhassan has again accused the Taraba State Government of refusing to release relief materials provided by the federal government for distribution to the internally displaced persons (IDPs) in the state.

Addressing IDPs gathered at the Federal Science and Technical College (FSTC) Jalingo, the state capital on Monday, the minister, who is from Taraba, said the relief materials which comprised 10, 000 metric tons of maize were deposited with the state government for safe keeping by the National Emergency Management Agency (NEMA).

“You may wish to note that Mr. President had earlier directed all ministers in the six states of the North East to go back to their respective states and conduct the distribution exercise and by this directive, 10,000 metric tons totaling 12,000 bags of maize were allocated for distribution to IDPs in Taraba state”, she said.

According to Mrs. Alhassan, the items were delivered to the Taraba State Emergency Management Agency (SEMA) for safe keeping with clear instructions to hand them over to her on arrival in the state for distribution to IDPs.

“But to my surprise today (Monday), we were denied access to the materials by officials of the state government”, she told the large gathering of IDPs.

In a swift reaction, the Chief of Staff, Government House Administration of Taraba State Mr. Rabo Usman, blamed the minister for the misunderstanding, saying she did not officially inform the state government of her visit to the state.

Mr. Usman said that it was wrong of the minister to undermine the government and the authority of the governor of the state, Arc. Dickson Darius Ishaku, adding that two ministers had undertaken official visits to the state before Senator Alhassan and they were received by officials of the state because they gave advance notice of such visits.