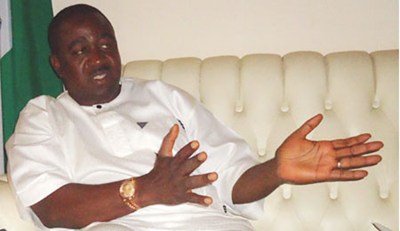 A former governor of Benue State, Gabriel Suswam, has given a damning verdict on the administration of his successor, Samuel Ortom, saying that there is no government in the state given the current level of insecurity across the 23 local government areas.

Speaking yesterday during the thanksgiving service in his honour organised by the Benue State Zone A Women Progressive Forum to mark his one year exit from the foremost seat of power in the state, Suswam said, “The primary responsibility of every government is to protect lives and properties. When a government cannot do this, it means there is no government in the state but something else”.

The former governor, who is standing trial before a federal high court in Abuja for alleged corruption, claimed that the Ortom-led government had “unleashed nothing more than hunger” on the people of the state and that residents were being killed everywhere.

Suswam also said that salaries were being owed workers for about eight months and that the people had continued to suffer unjustly such that even when some die, their relations could hardly raise resources to bury them.

He added: “A government that is daily harassing old market women, forcing them to pay multiple taxes, cannot be called a government. Today in Benue, you hear of killings here and there”.