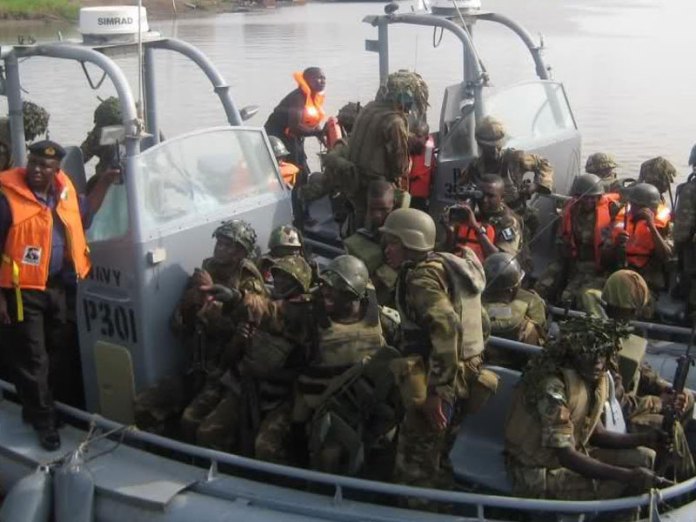 The Nigerian Army of the Operation Delta Safe on Tuesday paraded three suspected killers of 3 soldiers at a military checkpoint in Nembe waterways, Bayelsa State two weeks ago.

The Commander of the task force, Real Admiral Joseph Okojie, while speaking with journalists at the headquarters of the operation in Igbogene, Bayelsa State, said two members of the militants were killed in a gunfire as the troops take raided their hideout at Saraba Creek, near Okiama community in Okigbene, Southern Ijaw Local Government Council.

“This followed an earlier raid of August 13 where several items, including the military gunboat taken away from the murdered soldiers at Nembe.”

The mop-up operation on the militant camp at Epebu creek led to the discovery of a large cache of arms and ammunition including nine AK 47 rifles, one FN rifle, four HK21 MG, one G3 MG, three GPMGs, magazines and gun powder, the commander said while parading the suspects.

“Let me affirm the commitment of the Joint Task Force Operation Delta Save of its resolve to ensure peace and economic stability in the region,” Okojie said.

One of the paraded suspects, Austin Dikuro, who said he was the second in command in the militant group, confessed to his involvement in the attack and killing of the soldiers, saying it was their ‘commander’ who asked them to open fire on the soldiers.