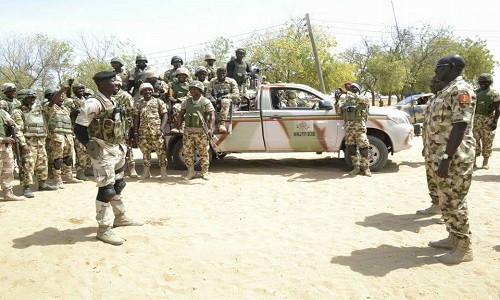 The Nigerian Army troops of Operation Lafiya Dole at harbour in Kangarwa, Borno State, at about 5:30pm on Sunday, repelled attacks from the Boko Haram terrorist groups, killing sixteen and injuring others.

“The troops received an alert and rose to the occasion. They dealt a decisive on the insurgents, killing 16, and recovered arms and ammunition,” Army Spokesperson, Col Sani Usman said in a statement issued to newsmen on Monday.

“Unfortunately, an officer and 11 soldiers were injured in the encounter,” he said.

Col Usman added that the injured were treated at the unit’s medical facility and are in stable condition.

In a related development, four persons were also arrested by the troops for attempting to cart away armoured cables belonging to the Power Holding Company of Nigeria (PHCN).

The culprits who were arrested at about 1:20am on Monday include: Aliyu Jibrin, 24, a National Youth Service Corp (NYSC) member, Ismaila Baba, 22, a student of Ramat Polythechnic, Mohammed Suleiman, 25, a driver and his assistant Mohammed Bukar, 15.

He added the suspects were being interrogated and would soon be handed over to the appropriate security agency.