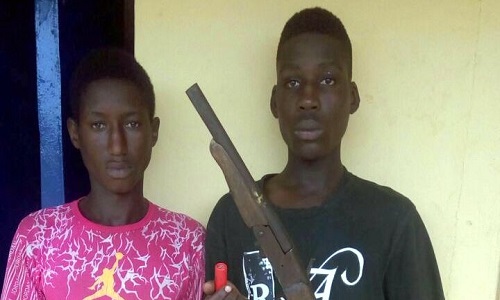 Two notorious cultists, who are on the wanted list of the Ogun State police command, have been arrested.

Omotola Amuda (18) and Adesegun Mayowa (20) were arrested at Ago-Iwoye town, Ijebu North Local Government Area of the state by policemen on routine patrol in the area.

The Ogun Police Command spokesman, Abimbola Oyeyemi, who confirmed the development on Sunday, said Amuda and Mayowa are members of a deadly cult group terrorizing Ago Iwoye and environs.

When they were arrested, Mr. Oyeyemi, an Assistant Superintendent of Police, said the suspects were in possession of a bag containing locally made guns and cartridges.

He said the Commissioner of Police, CP Iliyasu Ahmed, had already ordered that the suspects be transferred to the Special Anti-Robbery Squad in Abeokuta, the state capital, for further investigation.

ASP Oyeyemi added that the commissioner warned that criminals operating in the state should either change their ways or relocate elsewhere because Ogun would be too hot for them to operate.

He also quoted Mr. Ahmed as assuring residents that the Police Command would do everything possible to rid the state of crime and criminality.