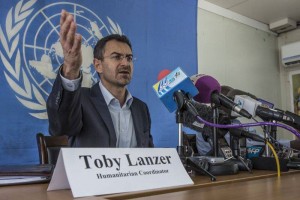 The United Nations (UN) has given its assurance that alleged cases of diversion of resources meant for the sustenance of Internally Displaced Persons (IDPs) would be probed.

The UN is aware of the allegations of diversion of funds and relief materials, especially food items meant for humanitarian purposes even as the IDPs in the North-East of the country are suffering from hunger and malnutrition.

On Monday, United Nations Assistant Secretary-General and Regional Humanitarian Coordinator for the Sahel, Mr. Toby Lanzer, while addressing journalists in Abuja on his recent visit to some communities in Borno State assured of the UN’s readiness to look into the matter and find possible solutions.

Responding to the question of alleged diversion of funds in the North-East, Lanzer said such allegation, “is not representing what we are. If we have details of cases of this diversion we would definitely look into it.”

He also commended the federal government and the Borno State government on their efforts towards alleviating the plights of the victims of the Boko Haram insurgency in the country despite the drop in oil production which he says is down by 60 per cent.

The call for more collaborated assistance from other international agencies and governments was also made. Lanzer said that the rebuilding of the region is not something that can be tackled be a single government.

“There is no question that much more needs to be done in Bama, and indeed in other key towns of Adamawa, Borno and Yobe States, and more broadly across the entire Lake Chad Basin.
“The scale of the crisis in the region is staggering: nine million people need emergency relief; 4.5 million people are severely food insecure; 2.5 million people have been forced from homes,” he said.

Lanzer revealed that $279 million was required to address the humanitarian crisis, but only about $182 million has been released so far, making a paltry 36 per cent of the total funding needed to tackle the challenges.

He remarked that there has been considerable improvement in some areas, particularly Bama, when compared to his earlier visit in April this year.

According to him, Bama is now, not just under the control of the Nigerian authorities and now safe and stable but schools and clinics had reopened and attending to the needs of the people.