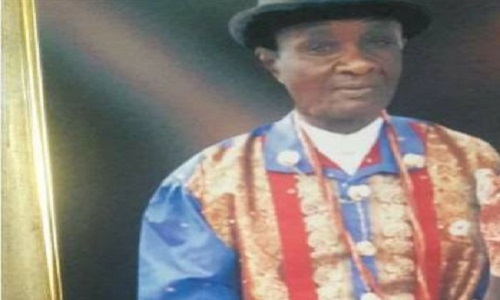 The father of a serving member of the Bayelsa State House of Assembly, Chief W.G Watson Iti, has been kidnapped.

The octogenarian was seized by four gunmen operating along the waterways of Bayelsa State at the weekend while conveying the body of his deceased wife for burial.

It was gathered that the incident happened at about 9.25am along the Okpoama-Egweama waterways of the local government area.

Chief Iti was said to be conveying the remains of his wife from Okpoama mortuary to Egweama, the deceased maternal home of his late wife for burial as customs demand, when the gunmen struck.

A source who spoke in confidence said: “Watson is a respected chief in Okpoama kingdom. His wife died and her body was deposited at the Okpoama mortuary.

“On Saturday, he was taking the body to his wife maternal home at Egweama which was about seven minutes away from Okpoama when gunmen attacked them.

“The gunmen were four and they were operating on a 75horsepower boat. The chief was traveling with the casket bearing his wife’s body on a 115 horsepower speedboat. The gunmen shot four times at them and forced them to stop”.

According to the source, on approaching the boat, the gunmen gave the boat driver machete cuts, stole handsets and other valuables of the boat’s occupants before they whisked Pa Watson away to an unknown location.

Confirming the incident, the victim’s son and member of the state assembly, Chief Alfred Watson, pleaded with the kidnappers to release his father unconditionally alleging that the abductors “were within”.

The younger Watson vowed not to pay any ransom to the abductors adding that efforts were being made to locate his father and arrest the kidnappers.

He said: “I am asking them to release my father unconditionally because it was something done by people within. How can you kidnap an old man who was going to bury his dead wife?”

When contacted, the Police Public Relations Officer (PPRO), Mr. Butswat Asinim, confirmed the incident and said the police were investigating the development.