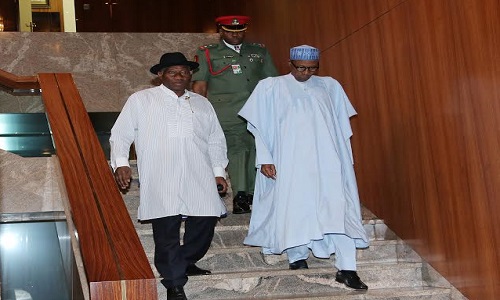 Former President Goodluck Jonathan is currently at the Aso Rock Presidential Villa, Abuja, where he is holding a meeting with President Muhammadu Buhari at the latter’s office.

The former president arrived the Aso Villa at 2 pm Wednesday, and went straight to the president’s office.

Dr. Jonathan’s visit came some few days after a militant group, Adaka Boro Avengers, said that it canceled its earlier plan to declare a Niger Delta Republic after receiving a phone call from the former Nigerian leader to drop the idea.

It was learnt that Mr. Buhari, who had earlier presided over a meeting of the Federal Executive Council, FEC. was observing his afternoon prayer at the villa Mosque when his predecessor came calling.

He went in immediately after the prayer to meet with Mr. Jonathan.

This is the third time the former president is visiting the villa since handing over on May 29, 2015.

Speaking with State House correspondents after he emerged from the closed-door meeting with President Buhari, which lasted for about 20 minutes, Jonathan said he, as well as Ijaw elders and traditional rulers, were working to enthrone peace in the restive Niger Delta region.

Niger Delta Avengers and other militant groups have continued blowing up oil installations in region, vowing to cripple the Nigerian economy except certain demands are met.

The former president, who was responding to a question on what role he was playing to ensure that the militant groups abandon their violent struggle and embrace the federal government’s offer of dialogue, stressed that a united Nigeria was needed as there cannot be development anywhere without peace.

According to him, Nigeria is great not because of oil, but because of her size and diversity.

When asked to comment on the ongoing war against corruption, Mr. Jonathan declined, saying most of the cases were in court, assuring that when they were concluded, he would talk at an appropriate time.

The former Nigerian leader said he was at the Aso Villa to brief Buhari about his international engagements, especially his recent appointment by the African Union as leader of its election observation mission to Zambia.