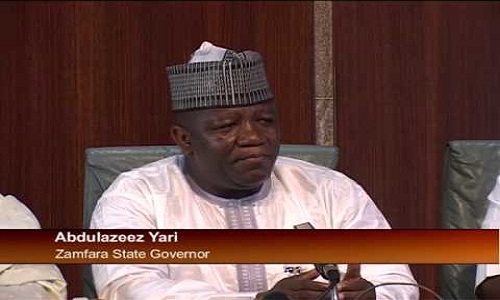 Members of the Zamfara State House of Assembly have denied collecting N5million each as bribe to drop their bid to impeach Governor Abdulaziz Yari over financial misappropriation.

The 24-member House had last month listed six impeachable offences against the governor including the alleged misappropriation of N11billion bailout fund, N1billion agricultural loan released to the state by the Central Bank of Nigeria and ‘corrupt abuse of local government funds’ among other sundry offences.

The lawmakers, however, dropped their bid to impeach Gov. Yari, who described their grievances against him as ‘selfish’, following a frantic intervention by the All Progressives Congress, APC, and some stakeholders.

However, there were unconfirmed reports that the impeachment threat did not just go away as money exchanged hands.

The reports were dismissed yesterday as false by the House leader, Abdulmumini Isah Talata Mafara, who described the allegation as baseless and ill-motivated.

While admitting that there was monetary allocation for the Assembly to cover what is statutorily due to the legislators and other staffers, the House leader added that no particular member was given any money other than his entitlements.

“You know, the government had not allocated money to the House for three months and it is part of our struggle to make the payment a reality. The allocation received, covering expenditure for two months, was meant for every staff in the Assembly, including cleaners.

“What we want people to understand is that we forwarded 17 issues of contention to the government and all these issues are for the betterment of the citizens of the state, and the public has seen them. Therefore, I wonder why some people are coming up with allegations like this.

“For instance, the issue of problems in the state civil service is currently being looked into and would soon be resolved”, said Marafa.