The Delta State Police Command on Monday paraded two suspects who sold a three-month-old baby to a Lagos-based businessman for N500, 000.
The suspects, a 43-year-old fake nurse, Uju Okonkwo and a fake lawyer, Ezurum Joseph, who claimed to have graduated from the Nnamdi Azikwe University, NAU, Anambra State in 2011 with registration number 39017, confessed to the crime. 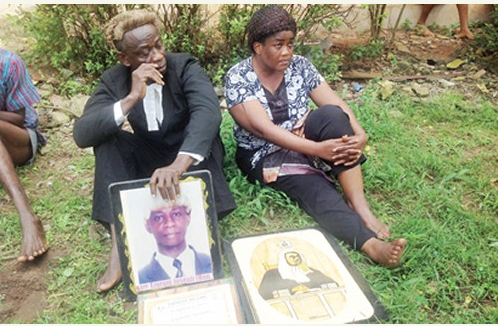 Parading the suspect, the state Commissioner of Police, CP, Zanna Ibrahim told newsmen they will be charged to court soon.
In his confession, the fake lawyer said over the years, he had provided the hideouts where Okonkwo was using to harbour her victims and had stood as the woman’s solicitor.

He added that he dropped out of school after he could not pass four courses, which prevented him from attending Law School.

“I took to defrauding unsuspecting members of the public since then,” the fake lawyer confessed.

Okonkwo on her part said she had no registered name for her organisation (specialized in trafficking under-aged girls and babies).
She said she had been in the game with the lawyer for over one year, confessing that she sold a baby for N500, 000 to a Lagos-based businessman.

The CP also noted that apart from arresting Okonkwo after selling the baby, the command also discovered she operated a brothel and human trafficking ring.

He said Okonkwo was nabbed after an intensive surveillance by his men.

“Men of the Special Anti-Kidnapping Squad, SAKS, raided the hideout on Okpanam Road in Oshimili North Local Government Area of the state after a tip off.

“Three female human trafficking victims, Happiness Igwe, 20, Chinyere Ude, 19 and Esther Frank, 17, who were respectively in their advanced stages of pregnancy, were rescued from the traffickers’ den.

“The three girls had been kept there and would soon deliver while their babies would be sold to the highest bidders. The girls disclosed that they were brought to the hideout by Okonkwo, a widow, who claimed to have worked at Chinonso Hospital, Nkpor in Anambra State, for the purpose of selling their babies after delivery”, he stated.

Describing the suspects as human traffickers, the CP said: “The matter before us is a complete case of human trafficking and other related offences. Only God knows how many innocent children they have sold into slavery, to unknown persons for money rituals.

“The suspects have started helping us in our investigations.

“The war against crimes must be won to stop careless wastage of lives and property,” Ibrahim added, appealing to parents and guardians to be alive to their responsibilities in providing proper guidance to their children and wards.‎”