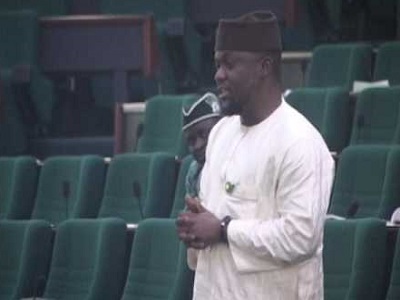 The member representing Iseyin/Itesiwaju/Kajola/ Iwajowa federal constituency of Oyo State, Abiodun Olasupo, has explained that ‘budget padding’ remains a constitutional responsibility of the legislative arm of government and as such the House of Representatives did not break any law.

He was reacting to the controversy that has continued to trail allegations by the former House Appropriation Committee Chairman, Abdulmumin Jibrin, that Speaker Yakubu Dogara and three other principal officers, padded the 2016 budget to the tune of N40billion.

Olasupo, who spoke Wednesday during the inspection of some of his zonal intervention projects and federal government projects within his constituency in Oke-Ogun area of Oyo State, said Sections 80 and 81 the Nigerian Constitution empowers the lawmakers to alter budget proposals‎.

The lawmaker argued that budgets presented by the executive arm of government do not often reflect true federal character hence the need for ‘padding’‎.

“If you look at the Nigeria Constitution, what Honourable AbdulMuminin Jibrin refer to as padding is tantamount to what the constitution defines as the function of a member of House of Representative because the constitution guarantees the three major function of making law, appropriation, and over sight.

“In appropriation it is either for us to add, subtract or change and what Hon Jibrin has been trying to say is that we are changing, inserting and adding, so if that is what he calls padding then that is what the constitution expects the house of representative to do.

“In my own opinion been an active member during the budget defence, I was involved in the budgeting system of up to six ministries, I participated in FERMA, NAVY, health institutions, governmental agencies and a whole lot of them. The entire budgeting system make it possible that if you are elected as a member of national assembly and you are not ready to do what Muminin Jibrin calls padding, then you are a failure, because basically the budget that is been brought to the national assembly does not reflect the principle of federal character as guaranteed by the constitution”, he said

‎Olasupo, who chairs the House Committee on Legislative Compliance, suggested that to prevent a recurrence of what is presently playing out regarding the budget, all projects and employments from the executive should be done in a way that it reflects all parts of Nigeria.

Citing the budget as an example, he said it normally contains disproportionate distribution of projects and in most cases, reflects where the minister is coming from, since it is an executive bill.

‎He went further to state that “When the executive are bringing the budget they are not considering my constituency, so they will bring a budget to me and I am expected to approve it, and if it doesn’t have the interest of my constituency you want me to keep quiet? No I won’t. What I will also do is to insert what will favour the people of my constituency, which is what Jibrin calls ‘padding’.

“I am not saying somebody is wrong or right but I do not see what is bad in attracting projects to my constituency. For the first time in the history of this country a budget presented by the executive was reduced when a president personally presented the budget to the national assembly personally. It means that we are shifting away from impunity, and corruption that has characterised the government of the past”, he added.

‎Olasupo noted that the legislature have only had an unhindered experience of 16 years when compared with the executive, appealing to Nigerians to be patient with the national assembly to get right all their lapses in no time.