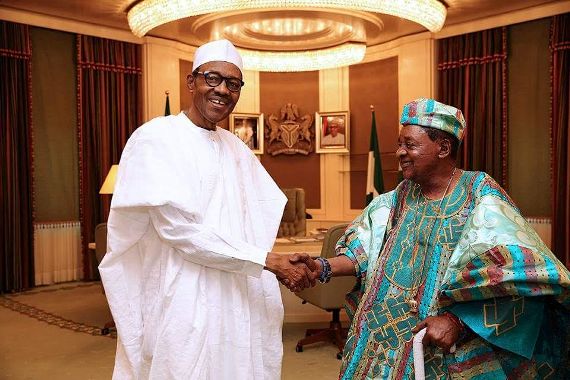 President Muhammadu Buhari on Thursday met behind closed doors with the Alaafin of Oyo, Oba Lamidi Adeyemi III, at the State House, Abuja.

The monarch, who spoke with State House correspondents at the end of the meeting, said he met with the president to hold talks on problems facing the country including militancy in the Niger Delta and insurgency in the north.

According to Oba Adeyemi III, President Buhari requested traditional rulers to convey their advice on problems in the country in writing.

He said: “As a Nigerian and one of the topmost traditional rulers in the country, over the time, I sent a memorandum to the president, which he acknowledged and he asked me to come and endorse those things I have written.

“I think it is time for me to use the proper channel to reach the president for suggestions and advice. Where he deserves commendation, I should also do that.

“Especially as it concerns the multi-dimensional problems Nigeria is facing; the Avengers and the bombing of oil installations, MEND and Boko Haram insurgency in the Northeast.

“One major diplomatic point the president scored recently was the visit of the United States Secretary of State, John Kerry. America does not usually send top officers for such visits if they have not used certain parameters to gauge the country’s performance.

“I have met with the president and offered some suggestions. We are losing huge resources to the activities of the Niger Delta Avengers. Coming close to that is the infiltration of the militants in Lagos and Ikorodu where in the last three weeks, 10 landlords were massacred.

Noting that the Federal Government responded immediately to stamp out the threat, the Alaafin said that normalcy has since returned to Ikorodu and Arepo areas.

He added: “If they had successfully spread their activities to the South West, there would have been more destruction. Lagos is the economic heartbeat of the nation.

“The president listened attentively and he has asked me to pass the information to other traditional rulers in my domain to assist the government by giving advice because he is a good listener but that such advice should be put in writing so that he can then relate it to the problems affecting Nigeria”.