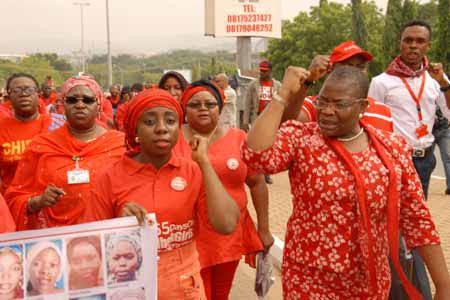 The Buhari Media Support Group, (BMSG) has appealed to the Bring Back Our Girls (BBOG) advocacy group to shelve its proposed demonstration to the Presidential Villa.

The BBOG, in a statement signed and issued on Friday in Abuja by its co-conveners, Aisha Yesufu and Oby Ezekwesili, said it would commence as from Monday, a series of actions that will compel the Federal government and international community to take decisive action towards the rescue of the abducted Chibok schoolgirls.

Some of the actions the group said it will take include several marches to the Presidency, media interactions, and engagements with critical stakeholders such as Governments, International Organizations, Statesmen and Influencers.

In its reaction, the BMSG, which is a pro-President Muhammadu Buhari group, explained that shelving the demonstration was necessary to avoid complications and anything capable of undermining efforts of the government to rescue the girls unharmed.

The group in a statement signed by Muhammad Labbo, noted that playing politics with the Chibok schoolgirls’ abduction saga was unhelpful and embarrassing to the government and counterproductive to the silent efforts of the military to rescue them.

‪According to him, government would take serious exception to the mobilisation of the parents of the kidnapped girls to score political advantage or exploiting the tragedy to play to the gallery.

He further said dragging the parents of the victims to Abuja for endless demonstrations would only compound a bad situation, and give them the impression that a rescue mission “is as simple as ABC”.

‪Labbo also warned the BBOG against claiming monopoly of patriotism and humanity over the government by seeking to undermine the silent efforts of the military to map out strategies to safely rescue the girls.

‪He stressed that if there was a formula for rescuing the girls within 24 hours unharmed, government would have done that, reminding the group of the complexities and sensitivity of hostage rescue missions.

‪”The terrorists have no rules of engagement and therefore, would not mind killing all the hostages if the Nigerian military attempts any rash action”, the BMSG coordinator said.

‪He urged the BBOG not to blackmail and stampede the government into doing something which might lead to the large-scale deaths of the hostages, adding their captors had no regard for the sanctity of life.

‪”Any rescue attempt that leaves the kidnapped girls dead would not worth it.

“Our armed forces have been working hard on plans and strategies of how to rescue the girls but don’t have to publicise their plans because absolute secrecy is needed.

“The primary objective of any rescue mission is to get the hostages alive and unharmed”, he said.

Labbo advised the Bring Back Our Girls Group to support the government in its efforts to deal with the challenge rationally, adding that the BMSG frowns at efforts by the BBOG group to portray the government of the day as insensitive or inhuman because it did not act according to their idealistic theories of easy rescue mission.

“If a reckless rescue effort results in disaster for hostages, the advocacy group would be the first to crucify the government for sacrificing the lives of the girls”.

‪He also stated that the recent Boko Haram video clip was a propaganda effort to force the government to surrender to terrorists and release their members in custody.