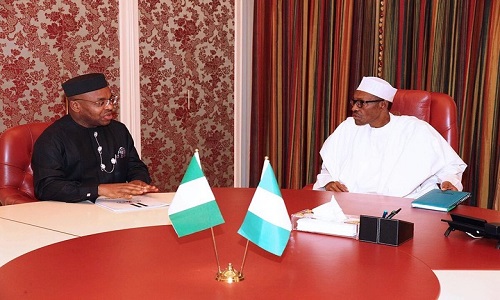 Akwa Ibom, which is one of the Niger Delta States, has witnessed unprecedented level of peace amid the militancy and destruction of oil and gas installations in the oil-rich region in the last few months.

Addressing State House correspondents shortly after the meeting, the governor said he was at the Presidential Villa, as part of his responsibility, to brief the president on how things are being done and how they are faring in Akwa Ibom, as the “father of the country”.

On what he discussed with President Buhari during the closed door meeting, he said “We discussed issues of security. Unfortunately, everything discussed under security is covered”.

On whether or not he made a request to the president, Mr. Emmanuel said: “Not really a request but a feedback. At times, a feedback could be effective than a request. This is because a feedback is necessary for further actions and the rest of things you want to do.

“I think this is the essence of the whole thing: to keep letting everybody know that at this point it is a time everybody must join hands to work for the country and see what we can do from the state to the local government level, to support the vision of making Nigeria reach where we want it to be.

“Well, I don’t know whether you want me to redefine that word ‘restiveness’, but permit to also say you are still pushing me to discuss security, which we don’t discuss on camera. Spare me for today. But rather than call it restiveness, I will say everything we discussed is about the wellbeing of Nigerians. How can we make their situation better? I think that is the way I look at it.

“Whether you look at it; from security, infrastructure, security or any other angle, that is the ultimate. At times, I move from ‘what do I set to achieve and how do I want to do it?’ I think that is the way I look at it. What have I set to achieve at the end of the day? It is the interest of everybody that we are working for”.