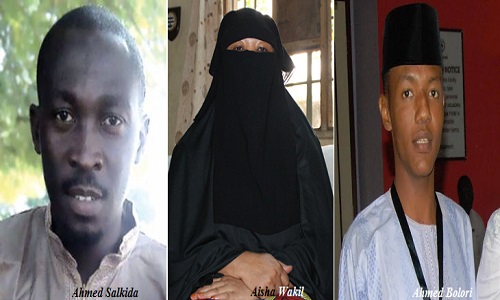 The Nigerian Army has declared three persons wanted in connection with the Boko Haram insurgency and abduction of the Chibok schoolgirls.

The wanted persons are Ahmed Salkida, a journalist also known as “Ambassador”, Ahmed Umar Bolori and the only female among them, Aisha Wakil.

The Army declared them wanted following the release of a viral video clip purporting to show some of the abducted Chibok schoolgirls on Sunday.

It would be recalled that the video clip was exclusively sent to Mr. Salkida, an indigene of Borno State with known access to the leadership of the Boko Haram sect.

Mr. Bolori is known as coordinator of the Fa’ash Foundation and the Partnership Against Violent Extremism (P.A.V.E) and also lives in Maiduguri.

Mrs. Wakil, a lawyer, also known as “Mama Boko Haram”, was one of the persons once listed by the extremist group as a member of its failed negotiation team with the federal government in 2013.

The spokesperson of the Nigerian Army, Sani Usman, in a statement yesterday, said the wanted persons know the whereabouts of the Chibok schoolgirls and have links with Boko Haram.

The Army said it was relying on relevant laws of the country, especially the Terrorism Prevention Act, 2011 (as amended).

Mr. Usman, a Colonel, said: “Two recent incidents have pointed to the fact that, there are three individuals namely; Ahmed Salkida, (Ambassador) Ahmed U. Bolori and Aisha Wakil that have information on the conditions and the exact location of these girls.

“Therefore, the Nigerian Army hereby declares the two gentlemen and the lady wanted for interrogation. We are relying on the relevant laws of the land and in particular the Terrorism Prevention Act 2011 (as amended) where Nigerians could be punished for failure to disclose information about terrorists or terrorist’s activities. This becomes necessary as a result of their link with the last two videos released by Boko Haram Terrorists and other findings of our preliminary investigations.

“There is no doubt that these individuals have links with Boko Haram Terrorists and have contacts with them. They must therefore come forward and tell us where the group is keeping the Chibok Girls and other abducted persons to enable us rescue them.

“We are therefore calling on all Nigerians and peace loving people to give us useful information on their whereabouts. We are also liaising with other security agencies for their arrest if they failed to turn up”.