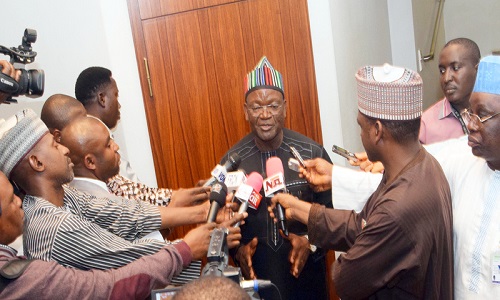 Governor Samuel Ortom of Benue State has said his administration will adopt the “stick approach” to resolve the security challenges in the state.

He made this known in a chat with State House correspondents after meeting with Vice President Yemi Osinbajo at the Presidential Villa yesterday.

Ortom said he decided on the stick approach after the “carrot approach” that was introduced earlier, failed to produce the desired result.

According to him, the carrot approach succeeded to a level because some people surrendered their arms, while many returned to their old ways because they were insincere.

Their insincerity, he said, necessitated the use of force.

“The carrot approach succeeded to some extent as many people surrendered their arms. But some went back to their old ways because they were insincere.

“We have now adopted the stick approach; security agencies in the state must restore safety to the state. The state must be secured from robbers, kidnappers and assassins. We need to rid our society of criminals.

“We also intend to encourage investors and they will not come if the state is not secure”, he said.

On the decision of his administration to declare Friday as public holidays, Gov. Ortom explained that it was to allow civil servants embrace agriculture, a decision he said has been yielding result.

On his mission to the State House, the governor said it was to brief the Presidency of efforts to tackle insecurity in the state.