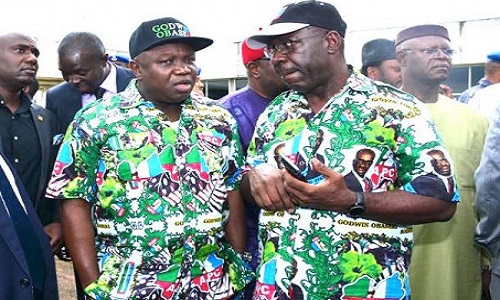 The Peoples Democratic Party (PDP) in Lagos State has accused the State Governor, Akinwunmi Ambode of “squandering” over N7billion of the state’s funds on the governorship campaign of the All Progressives Congress (APC) in Edo State.

The party made the allegation ahead of this Saturday’s governorship election in Edo.

The Lagos PDP, which also accused the governor of prodigality and neglect, and of exhibiting what it called “busy-body” in his style of governance, vowed to demand for his probe at the appropriate time.

The opposition party specifically carpeted Ambode for “sacrificing the welfare, security and concerns of Lagosians for the interest of the ruling party, the All Progressives Congress (APC)”.

SEE ALSO: Obaseki Can Make Edo Be Like Lagos – Ambode

“Gov. Ambode accepted the needless burden to be the national coordinator of the APC Edo governorship campaign committee and has literally moved Lagos governance to Edo State, squandering an amount believed to be over N7 billion and also pledging further human, logistic and financial support to the APC candidate for the election day”, the PDP said yesterday in a statement by its publicity secretary, Taofiq Gani.

Mr. Gani lamented the “inexpedient commitment of Lagos funds into partisan activities that are not beneficial to the state”, adding that “We are keeping tabs on him and we shall demand his probe at the appropriate time”.

to Osun State as nonchalance to the plight of Lagos people, who were affected by flood.

“At the expense of Lagosians, he took the government, executive and legislature to Osun State to commission just a school building constructed by the Osun State governor, Aregbesola”, the PDP said.