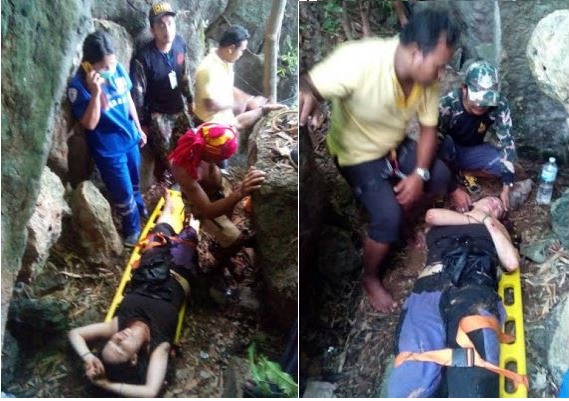 23 year-old American woman Hannah Michel Gavios was seriously injured and her legs broken in a 45-metre fall from a cliff at Ao Nang in Krabi, Thailand in attempt to escape a sexual attack from a man in Thailand. 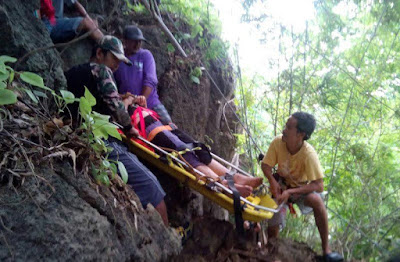 Pol Lt Songpol Bunchai, a duty officer at the Ao Nang police station said the attacker identified as Apai Ruengvorn, 28, tried molesting her twice, once at the top of the cliff and again after she fell onto the rocks below on Thursday, Sept. 1.

The second time, she bit his ear and he fled. He then called 191 to alert authorities that a tourist needed to be rescued. Miss Gavios then endured a night of pain, trapped between rocks near the sea with a suspected broken back, before rescuers found her on Friday morning.
“Officials received a call reporting that a tourist had been injured after she had fallen down a mountain in the Railay area,” Krabi Tourist Rescue Centre Director Nitiphat Mongkolpradit explained.
“Rescue workers were searching for her last night, but they could not find her, so this morning we when out to search again and discovered her lying in between rocks about 45 metres from the trail at the top of the mountain. She was only 15 metres from the water below,” he added.
Sarayuth Tantein, Chief of the  Haad Nopparathara National Park – Moo Ko Phi Phi said,
“Last night, park officials, Railay residents and people from the local cliff climbing club, all led led by park officer Boonnam Chuyradom, went to look for the victim. They found one man, later identified as Apai Raingworn, who admitted that he became aroused and made sexual advances toward a tourist while taking her from Railay to Tonsai,” he said.
Apai told officers that the woman panicked and ran away, causing her to fall down the mountain, Chief Sarayuth explained. The suspect was arrested on Friday after admitting to the crime. No charge have been filed as of yet, as police are waiting to question the victim, Col Piyapong told the media.
The victim was taken to a clinic in tambon Ao Nang before being transferred to Krabi Hospital. Doctors report she suffered a broken lower back and nerve damage requiring urgent surgery, she was transferred to Bangkok Hospital Phuket where she underwent surgery Friday night. The surgery was successful but doctors reported numbness in her legs.
“Ms Gavios is experiencing numbness on both of her legs and doctors have yet to confirm whether either of her legs are broken,” Nitiphat said.
Authorities notified the US Embassy, which contacted the hospital and arranged for the victim to be transferred to Bumrungrad Hospital in Bangkok. Her current condition is not known.
Source: Bangkok Post/Phuket News