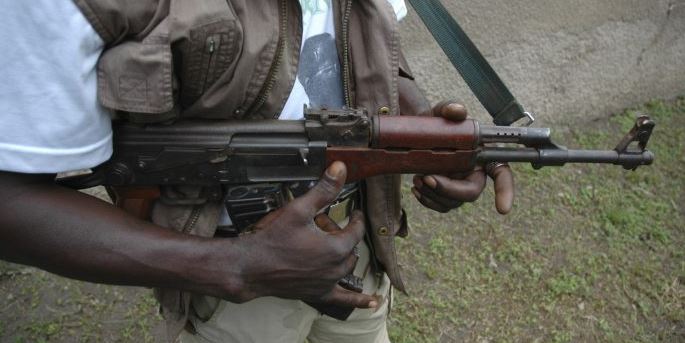 Suspected gunmen have killed a policeman said to be a security detail to a politician in Yenagoa, Bayelsa State.

The policeman, whose identity is unknown as of press time, was said to have been killed when the hoodlums invaded the residence of the politician.

Although the politician’s identity has yet to be known, he is said to be a ranking appointee of the government.

It was learnt that the incident occurred on INEC Road, at Kpansia area of Yenagoa on Thursday.

The Commissioner of Police in the state, Adeyemi Ogunjemilusi, was said to have confirmed the incident to members of the Civil Liberties Organisation.

It was however learnt that Ogunjemilusi did not disclose the circumstances surrounding the murder and the perpetrators of the act.

The CLO, led by the state’s Chairman, Nengi James, and former Secretary, Alagoa Morris, had visited the police boss to formally report alleged increasing cases of extra-judicial killings as well as harassment of innocent citizens in the state by the police.

One of the members of the CLO, who spoke on condition of anonymity, quoted Ogunjemilusi as saying that one of his men was killed by hoodlums.

He stated, “We were unaware of the incident until we got to the police command. The commissioner of police told us that he lost one of his men. We immediately condemned the killing of the policeman and asked the police to investigate the incident thoroughly in order to apprehend the mastermind of the act.

“The commissioner did not tell us the circumstances surrounding the incident. We condemned the killing of policemen in this country, not just in Bayelsa because all human beings are covered by the Universal Declaration of Human Rights, the African Charter on Human and People’s Rights and our various constitutions.”

It was gathered that the gunmen stormed the house of the politician about 3am on the day.

While their target escaped the hoodlums’ bullets, the policeman was not fortunate as he was reportedly hit and killed on the spot.

A source, who identified himself as Seiyabo, lamented the killing of the policeman and identified the deceased as a gentleman police officer.

He said, “He was a perfect gentleman, simple to a fault and down-to-earth. He was a very loving husband and a very friendly neighbour. I have neither seen him smoke nor drink alcohol; he was a true Niger Delta son and an example of how to be a policeman. He has never intimidated nor harassed anybody within our neighbourhood. He celebrated with those that celebrated and grieved with those grieving.”

When contacted, the spokesman for the Bayelsa state Police Command, Asinim Butswat, said he had not been briefed on the incident.

He said the Divisional Police Officer in charge of the area was on leave, adding that he would get full details of the incident this week and contact our correspondent.