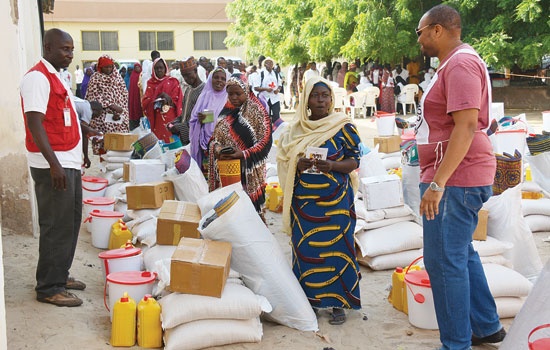 President Muhammadu Buhari has ordered the Acting Inspector General of Police, IGP Ibrahim Idris, to arrest and make an example of government officials accused of stealing food aid intended for victims of Boko Haram in the North-east Nigeria.

The Senior Special Assistant to the President on Media and Publicity, Malam Garba Shehu, made this known in a telephone chat with the Thomson Reuters Foundation on Thursday.

The order to the Acting IGP came on the heels of a Senate probe into allegations of alleged diversion and outright stealing of food aid by state officials in Borno State, where aid agencies have warned of starvation, malnutrition and dwindling food supplies for the displaced.

Public outcry was sparked in April when photos posted on social media appeared to show food items distributed as aid to Internally Displaced Persons, IDPs, on sale in shops. The items had logos of aid agencies, leading many to believe they had been diverted by state officials in IDPs camps.

Mr. Shehu in response to a question what the Buhari administration was doing to address the issue of alleged stealing of food aid meant for IDPs, said “The president has asked the Inspector General of the police to catch some of these alleged thieves, to look out for them and make public examples of them”.